For those of you who don’t know me personally, its important that you’re made aware of how much I admire Mick Foley. I was going to use the word ‘love’ there, but I’ve come to learn over the years that you should only utter that word when you’ve really thought it through, or if the context you’re using it in is regarding drenching a Bacon Double Cheeseburger in BBQ Sauce sauce and devouring that shit. So for now, I’ll hold off on telling Mick I love him.

I also considered making this a wee bit of a biographical thing. Picking out bits of his career and analysing them, giving you a detailed background of a life and times of Mick Foley, but really, whats the point? You all know the relevant shit, and anything you dont know, its probably better seeing it with your own eyes, rather than allowing my borderline demented ramblings to form an opinion for you.

So instead I’ll explain why Mick Foley reached iconic status for me personally, when so many have captivated me in wrestling over the years. I’ll start with when I first realised this man was my hero, and that was the night of the 1999 Royal Rumble. I’m not sure if my 10 year old self watched this live or not tbh, but I remember vividly the rollercoaster it took me on when I did see it. The Rock vs Mankind. I Quit Match. WWF title on the line. Mick went into this match as Champion, and undefeated in I Quit matches in his career, so the Foley fan in me allowed for cautious optimism when this kicked off. Cautious optimism that Mick Foley would indeed make The Rock quit. None of that mattered as the match wore on though, and for the first time in my life as a wrestling the line between reality and fiction had been blurred. As The Rock wielded that chair like he was Pete Sampras, and the chair was a Wilson tennis racquet. With every shot to Foleys head, the crescendo of ear shattering noise grew louder, and more menacing. At 10 years old, I had only recently discovered there even WAS a line between reality and fiction in wrestling. I used to think when I was told wrestling wasnt real, it meant they werent really hitting each other, so when I saw the punishment Mick was taking, I wasn’t entirely sure how the process it. If its not real, why is the blood almost blinding my hero? if its not real, why cant he get up? Surely if it was fake, he’d get up? Right? I edged closer to the edge of the couch and chewed my nails fervently. Deathly silent, but inside I was screaming at the TV. Make it stop.

Mick continued to take shot after shot. The noise grows more sickening. More real. The damage done feels palpable. It almost felt like you could reach up and touch your own forehead, and his blood would be your blood. I don’t know if this was an achievement in storytelling, or pure dumb luck, but when The Rock decided to go overboard with the chairshots (thats not me saying that btw, Foley said it himself in the Beyond The Matt doc that The Rock went OTT) he and Foley created the professional wrestling world as I know it today. A world full of interesting, athletically gifted and in a large amount of cases broken people. These weren’t just muscle bound caricatures, who could rip their vest clean off their chest. What the events of that match taught me is that it’s ok to be broken. Everyone is. Be it physically, mentally or a potent mix of the two. Everyone’s broken. Everyone’s just trying to find their way in the world, and Mick Foley had undoubtedly found his. For better or worse, he was a professional wrestler with an unmatched thirst for giving the fans what they wanted. Even if he knew in his heart of hearts that fulfilling their desires wasn’t the best thing for his own wellbeing, he was addicted to making those moments happen. So with every chair shot in that match, the pain was offset by picturing the moment he was creating. As he crashed down on top of that amplifier near the stage and sparks flew out of it, he didn’t see potential electrocution/death, he saw another chapter to his story. When he allowed his body to be thrown from the top of the Cell, with only an announce table and the horrified screams of Jim Ross and Jerry Lawler to break his fall, he didnt see a potentially shattered spine. He saw another moment. Does that make him a fuckin psychopath? that one will forever be open for debate. Probably on some level, but everyone I’ve ever admired on a personal level has had that potential for madness in them. Without that capacity to lose the plot every now and then, things like that “shoot” interview JR conducted with Mick simply don’t happen. That raw, unhinged emotion which came rushing out of Mick, only happens if a one or two mental screws have come loose over the course of a career where a lot of huge guys made it their business to deliver various forms of punishment to that skull of his.

Once again we reach the point in these opinion things where I struggle to round out the story. Should I include some funny anecdotes about his time as RAW GM? maybe a wee story about his ill-fated time with TNA. Or I could make some kind of story up where Mr Socko comes alive, and he and Mick open a Fishmongers together? Or I could round it off with simply why I continue to respect and admire Foley to this day. The main thing I’ve always admired is his unerring ability to stick to what he believes in. There’s an honesty about the man and that’s why people gravitate to him. That’s why his kids seem to genuinely enjoy spending time with him, and his wife still loves him. He achieved the seemingly impossible and kept a happy, loving family throughout a career which demands that you make their happiness take a backseat. He strikes me as the kind of man who never allowed that to happen though. Everything he ever done in his career, no matter how close it might have taken him to death for the sake of a story, was always motivated by giving his family the best life he possibly could.

And that’s what I mean by blurring the line between reality and fiction in wrestling. Mick Foley was the first wrestler I looked at as a man first, and a wrestler second. He draws you in to his own personal story just as much as he ever drew you into his stories as a wrestler. That’s a unique talent that only a handful have ever had, and that’s why his legacy will be a lasting one. Oh aye, and see that thing I held off on saying in the first paragraph? sack that. I love Mick Foley and if I ever meet the great man, I will likely be reduced to a pile of moisture of varying textures.

Nae better way to round this off than a mildly creepy photo of me dressed as the man himself for Halloween when I was a youngster. 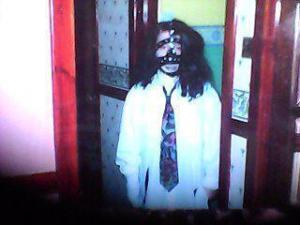