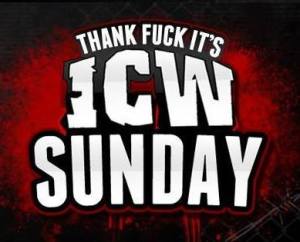 So Grado isnae at this show. That is a disappointment of course, as Grado certainly adds something to every show he’s on. Nae doubt he’d do the same at this one, but Grado disnae make ICW what it is. Grado is one of a great number of talented, important people who are part of making ICW one of the most diverse and entertaining indie wrestling companies in the world. So if you’re a cunt going tae tomorrows show with a negative mindset cause of Grados non involvement, either sell yer ticket tae somecunt who wants it, or sell yer arse for choclate buttons. Just dont fuckin detract from the show that does take place wae any kind of incessant Grado chanting, huvin BO, or being a wank in any way, shape or form. Ta much. x

Easily one of my favourite matches in ICW when these two hud a bittae ah grapple in Edinburgh last November. Their chemistry wis aff the scale. If this match goes ahead as scheduled, then its got stoater written all over it, but I’ve got a wee feeling that this might be made a Triple Threat match for the Zero-G belt and we get another does of SUPRISE DEVITT…OH MY GOD, HE’S HERE, LOOK AT HIM. Nah but, If it remains a singles match, I see Mark Coffey winning it. Would be daft to totally dismantle his momentum when he’s been one of the top guys for the past year.

Jimmy Havoc, The Bucky Boys and Wolfgang vs The NAK

I’m calling it the noo. Jimmy Havoc joins the NAK the night. After a brutal brawl between these 7, it gets tae a situation where Havoc and The Buckys face off wae The NAK, Wolfgang down and out, and with the numbers seemingly even, Jimmy Havoc cracks yer Buckys wae an auld gym shoe filled wae thumbtacks. The NAK ALWAYS have the numbers advantage, even when it appears they dont. If that disnae happen, the match will be chaos. Buzzin tae see yer Jimmy Havoc return after watching some of his excellent heel work down south lately. Thats another reason I fancy him joining the NAK anaw, he’s one of the best heels going at the moment.

Intae this for numerous reasons, but the main one has tae be gettin tae see Red Lightning back in the hunt for that belt. Forever been one of the most captivating bastards in the company and Scottish Wrestling in general. He’s got that IT Factor. A troubled genius, who could snap at any moment. Jesters got his work cut out for him the night, but I fancy him tae retain, with a Renfrew cash in teased, only for Red tae climb back in and help his pal fight aff yer NAK.

4 matches eh? thats half yer usual ICW card, so I expect shenanigans. If Devitt appears, I’d love tae see him go up against Kenny Williams, but I reckon its more likely tae be his stablemate, the bold JOE HENDRAAAAAAY. No sure if Polo has set off for Japan yet, but if not, I’d expect tae hear fae him. Big Damo will smash a cunt or two anaw. Mikey Whiplash will probably find a Grado shaped vessel tae batter anaw. Who the fuck knows really? Its gonnae be carnage. Its sold oot. Lets aw get tae Glesga, get the baws oot, n get tae wavin them aboot. 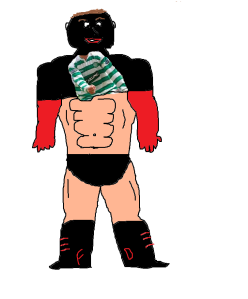