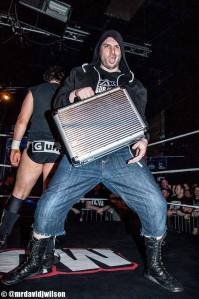 I fired a few questions at Chris Renfrew before Still Smokin a couple of months back. It was supposed to be part of another blog I was writing, but I’ve no had the time to go back and finish it and now hauf of it isnae relevant. I thought the answers here were worth putting up on their own though, so aye. Here they are. 5 Questions wae Chris Renfrew.

1. How long have you been involved in wrestling, and besides the “ladies choice” gimmick, what other gimmicks have you had?

I first got involved in 2004 when I started training with SWA.In regards to gimmicks, I did the whole suited and booted faction thing in SWA with the Sinners basically created in the Ladies Choice gimmick because I looked like a wrestler called Chris Charisma, so I was the Ladies Choice. I messed around with a gimmick called Sweet Daddy P honestly cause I fancied a laugh and have this fucking amazing fur coat I wanted to wear, so I did. He only saw the light of day a few times but it was a giggle. I recently debuted a new gimmick over in Pride wrestling with Sweeney as my partner, combined we are called Street Justice, buy a ticket and see what it’s all about.

2. How high would you put wrestling Sabu in terms of what you’ve accomplished in wrestling to date?

Without a doubt, main eventing a Sold Out show in the ABC against a man that defined the style many of us have championed is a pretty big deal at this point in my career. Definetly up there with my highest acheivments in wrestling. Winning the tag team titles at Dave’s Not Here Man! is with that I think, as the NAK were shunned when we tried to put it over with SWA when me and BT wrestled there as our home company as that is where we both trained. We were told flat out it wouldn’t work. We did eventually get a shot at the NAK in SWA, but it was in without a doubt the worst match I have ever been a part of with myself and BT Vs Conscience and Adam Shame, with 6 paying customers in attendance. And it was a lumberjack match, so there were more wrestlers than fans! ICW gave the NAK idea a chance and we have at this point had both a succesful face and heel run, the fact it is a concept based on real life friendship makes it so much sweeter.

3. You’ve been the heeliest cunt in Scottish Wrestling for nearly a year now, but before that you were Mr ICW, and seemed to appeal to the hardcore fanbase. Which role do you prefer?

I have loved doing both. The face run was great obviously because I was up there as one of the most popular faces in the company as they seemed to connect with the character, I was something different that represented what ICW was all about, with Jester, The Bucky Boys and a few others. But it got to the point the character was starting to go stale and it was decided a heel turn would breathe life into my ICW run. The actual heel turn moment with Dallas is still my favourite moment I’ve been a part of as be managed to pull it off with pretty much nobody seeing it coming, for me wrestling isn’t just the pops it’s making people show a range of emotions. To nail that shock moment to start the heel run was amazing. The heel run has been great fun as we always envisioned the NAK faction as a heel group. It seems it’s hard to maintain heel status in ICW at times because if you are too good at your job they often end up cheering you, Jackie Polo being the prime example of that. The fact we are considered the most hated heels in the company now is a great accomplishment because we have managed to pull off a face and heel run of some relevance. Pretty fucking sweet eh!

4. Who’s yer favourite opponent been to date, and why?

I can’t pick just one opponent as there are several guys I consider to be the best guys I’ve wrestled against for different reasons. BT Gunn is an amazing talent. I know my opinion of that could be seen as biased but the fact is he can wrestle any style you ask him to. He can take it to the mat and wrestle, he can fly around and is fearless, he can brawl, he is willing to put his body on the line for the good of the match and he is completely unselfish, he thinks of the greater good of the match rather than just getting all his shit in. Stevey Boy is the most under-rated talent in the country and with Dickie Divers is the best bumper around. He has 10 years of wrestling experience and he’s only 21, people probably don’t know that. Started his trade at SWA then moved over to the PBW school, so he has plenty of knowledge and is a joy to wrestle. Wolfgang is the same, all the attributes of a great wrestler, a pleasure to wrestle. Lionheart was the guy that really out me over with the ICW fans and put me on my face run, we just click in the ring and I love my matches with him, can’t wait till he’s fit again to get back in the ring with him as we have plenty of unfinished buisness. Rampage Brown is another name, brilliant believable big man and someone I think is very under-rated overall across the UK scene.

5. Last yin. Does Dallas call ye Chris Runthrough quite often or was that just playing up for the doc? i can imagine cracking him wae that kendo stick last year must have been extra sweet if thats been a running joke.

That was the first time he said it. Of course he was playing to the camera but it’s Dallas fuck sake haha! It was actually Stevey Boy who coined the phrase, it’s not a running gag, get’s said before run throughs and that’s it.

Cheers to Renfrew for taking the time to answer them. Planning to make interviews a regular thing on here once I have more time to do them properly.

Renfrew and the rest of the ICW roster sold out a venue in London recently. If yer intae reading about that, here’s a review.