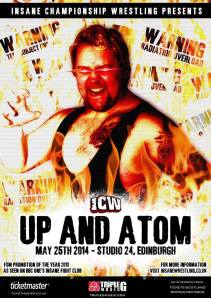 Fuckin Edinburgh mate. I’m sorry if kickin aff wae “fuckin” wis unsettling for ye, but its best out there now, I promise I’ll no dae it again, tae the next paragraph at least. So Edinburgh. Been gettin acquainted wae it more and more since ICW are there aw the fuckin (aw ffs, thats the last time but, swear down) time noo, and I pretty much follow these cunts. We are wrestling supporters, faithful through and through. Its no bad. I feel like I’ve become more used tae the pace Embra folk go at and after gettin bumped intae quite a lot initially. I think its almost a warning for outsiders. They can smell it aff ye. Ye no used tae Edinburgh now? There a wee shoulder barge for ye. If ye can survive the initial shoulder barge barrage yer wecome back. Simple as that.

Anyway, Up and Atom! Studio 24. Nane of yer fancy imports, cause who needs the cunts? Another sold out show, making this preview purely for entertainment purposes only. Nae “STILL TICKETS! Get them at yer local blacksmith if ye ken the secret handshake/wink combination, now!” Its just words for the sake of words. Only 5 matches announced but they’re aw gid yins. Is it finally Wolfies time? Will Grado defeat the hometown hero Liam Thomson, spitting on Edinburgh and aw its grand traditions and turning heel in the process? Will Chris Renfrew and Jimmy Havoc have a straight up technical wrestling match, wae naecunt gettin puttin through a table lined wae jaggy nettles? All will be revealed in about 10 hours or so. Unless yer no gaun. Then you’ll need tae wait for cunts tweetin about it. Probably inaccurately. Life’s a cow sometimes.

Strange yin considering they’re both good guys. I suppose Damo being a homicidal manbear means he cannae really be put in the hero or villian category, but still. These guys are both locked intae feuds wae local boys, so you’d think they’d be joining forces and discussing the fundamental weaknesses in Edinburgh folk in order tae bring down their respective foes. I cannae see this one going off without a hitch tbh, and I reckon we’ll get some sort of Joe Hendry interference. Maybe both Hendry and Kenny Williams stickin their noses in, and we get a Damo/Kid Fite team taking them on. If the match goes as planned, we’ll get a time limit draw, with the competitors shaking hands afterwards, before Damo tears Fito limb fae limb just for the fun of it, cause he’s a very scary big man, and sometimes scary big men rip peoples limbs aff it. Tomfoolery though. If yer lookin for a prediction here, that’s it. Tomfoolery. Laden wae it.

Love this. Hometown boy against the golden boy. Love that Carmel is officially Thomsons manager now, although it would be better tae see her in there wrestling herself, it means yer chances of a Carmel sighting are increased and sometimes ye get the double shift, so thats always braw. This’ll be a rerr bit of fun, and I actually think Thomson might sneak it with the aid of some Carmel trickery. Classic heel patter. Him and his burd join forces for the win, and he stoats up the road no gien a fuck. Maybe some Kid Fite involvement tae even the numbers up a bit eh, cause ye know fine well that feud isnae done. Basically, for this match I predict things will happen, wae a dash of stuff in there anaw.

They’re gonnae knock fuck out each other. That’s how they operate. Divers, Darkside and The Bucky Boys urnae booked yet, so I could see this maybe becoming a 6 man brawl of some kind. Or even a 3 on 2 situation, but yer Jimmy Havoc finally has that sleekit wee heel turn everyone seemed tae think was a certainty at Show Me Your Lizard. Either way, if it stars and singles match or turns intae something else, somedys gonnae end up battered. Probably a lot of folk. If it stays a singles match, Renfrew will get the win thanks tae some NAK based shenangians, and sleight of hand  magic.

Been a long while fae I was so excited about a match. Nae disrespect tae anything else I’ve been seeing lately, but this is two of my favourite cunts in wrestling right now and for me, easily two of the best in the UK. How they aren’t both booked everywhere baffles me. Joes got a score tae settle with the NAK after being part of the Darkside joining the NAK situation. He’d have every right to be bitter anaw, cause ye could just tell, he meant every single sweaty bit of that hug him and James Scott shared, before he morphed intae something ever so sinister, but this’ll be fuckin amazin and I anticipate that me and ma pal will wind up evaporating at some point during it. Joe’s been on RAW and Smackdown this week as part of Adam Roses entourage, so if he dingies ye and mutters “common scum” under his breath when ye try n talk tae him, that’ll be why. Billy big baws n that. This’ll be artwork and I cannae pick a winner, so thats that. On tae the next.

Hmmm. I’d think if Jester is ever gonnae drop the belt, it’ll be at a big show, but maybe thats whit they want ye tae think eh? It would be oddly poetic if he dropped the belt to his pal and a very deserving champion in big Wolfie, and it was at a humble wee venue like Studio 24. I still don’t see it happening right enough, but either way I predict this will be Jesters best match as champion regardless of the result. Wolfgang will be gantin tae get himself firmly back in the title picture, so the big yin will be out to put on a show regardless. It would also make sense for Wolfy to take it, cause Renfrew is supposedly biding his time, waiting for Jester to self destruct, so he’ll shite his pants if a new champ is crowned. Shoulda cashed in when Jester wis pretty much bleeding tae death at the last two shows big yin. Either way this’ll be a belter.

Nae Jackie Polo, Mark Coffey, Mikey Whiplash, Solar or Noam Dar booked, so there’s gonnae be some impromptu grappling for ye. At least one match. Maybe even a doubler! Apart fae that, keep yer shin guards and mouthpieces in at all times, cause bodies are bound tae fly. Its wrestling. Its serious business. Safety first, then teamwork.

If ye didnae get a ticket, then I’m sorry for your loss. I hope whitever ye dae as an alternative insnae too sad. If yer sittin right now trying tae make a fae ticket it out of scrap paper, using the weans crayons. Just fuckin stop. Look at yersell. Pathetic mate. Have a bitta dignity fuck sake.