So RAW was superb in places. I fell asleep before the main event again (which was Cena and Reings vs Kane and Orton, so nae fuckin wonder I conked oot) So I’m gonnae fire that on right now and the first thing for todays daily thing will be my LIVE and REAL reactions to said main event. Know why I fell asleep though? Again? TRIPLE FUCKIN H. Stop being involved in everything, yer beak darkens the room, the darkened room makes me think its time for sleep, and within seconds I’m oot the game. Having just watched it, I can tell ye the main event was predictably shite. As much as I understand Cena being champ, and even as much as I get Orton being involved in the title picture, please remove Kane from my fuckin sight. Forever. Reigns and Orton started fighting outside the ring, and engaged in a merry wee dance up the aisle, and all the way backstage, seemingly for nae reason. Why were they dancing up the aisle whilst firing terrible venomless jabs at each other? Who was leading? Probably Orton, cause it was all part of a ruse tae give someone else the belt he has a shot at next month at Battleground. A ruse which saw Kane start throwing steel steps, and awful tombstone piledrivers at Cena, leading *sigh* Triple H tae summon his wee Superhero/Rent-boy to the ring cash in his recently stolen MITB contract. Orton and Kane both confirmed in a match which could see them win the belt in a matter of weeks, but they’re helping Seth win the belts now. Makes hunners of sense guys. Pure millions of sense.

Here’s the thing that trips me up (aside fae the numerous other things I mentioned tripping me up) once Seth made it tae the ring, and handed the briefcase to the ref, why did he take ages before considering starting the match? Cena was out cold, but fuck all about the MITB contract dictates that the champion has to be standing, so yer man should have started the match right away. I know it was done tae give Ambrose time to save the day, but would it not have been more effective if Ambrose hit him before he even got tae the ring? There’s sleekit Seth, traitorfaced trollop. Wandering doon tae steal some belts courtesy of a couple of cunts clinging on tae the dying embers of their relevance, and he cannae even hit the ring tae cash in before Deano unceremoniously wallops him. Dean did save the day though. Probably not intentionally right enough, I think his one and only concern these days is the demise of Seth Rollins jaw, and if he helps out other folk along the road, so be it. Roman Reigns eventually breaks free of Ortons spell backstage, and bursts back out tae the ring to spear Kane intae next week just as the big red sleeping pill was about tae smash Cena wae a chair. Leaving Reigns and The Beak to have a 2 minute staredown, pretty much confirming their match for Summerslam. A match which I sadly think will probably be a pile of dung unless Reigns gets PLENTY of singles matches between now and then. I’m intae the big cunt, but he’s still green as fuck, and unless he’s in there with someone who suits him down to a tee, the matches can be unsightly tae say the least. And by unsightly…I mean shite.

Poor Wade Barrett eh. That’s him out for a few months with a burst shoulder. Official medical prognosis is “gammy as fuck” leading to him being “out for fuckin ages” and as a result, he has vacated the IC Belt. For me it has more serious repercussions for Barrett, because after years of working hard, being really good at wrestling, and elbowing cunts forcefully…he was finally over. As over as any midcard guy has been in a long time, and a LOT more over than folk like Del Rio and Sheamus have ever been. His IC title reign had been filled with crackin matches, and hilarious promo work anaw, finally giving credibility back to that belt after a long period of folk no giving a fuck about it, so for me, he was a clear candidate to be a world champ in the next year or so. If they kept on building him the way they were, his time was coming. A well-earned shot, after having his chance at being a main eventer snatched aff him by Cenas refusal to put The Nexus over at Summerslam a few years back, and now this. Is it a wee bit ironic that a guy who’s gimmick is delivering Bad News having his push de-railed by some BAAAAD NEWS? course it is. Is it a tiny wee bit hilarious tae envisage a podium appearing in the middle of his living room, and elevating him tae a mirror where he can deliver this bad news tae himself? Yes. Yes it is, but stop fuckin laughing eh. This shit is nae laughing matter. I know he’s a big Rangers supporting, monarchy loving, smug bastard but this is wrestling. Things that make people unpleasant in real life are often excused in wrestling cause that person might have a really gid finisher, or a particularly cute attitude. I don’t make the rules pal, I just live by them, and my rule regarding Bad News Barrett is loving him unconditionally.

I hope I’m wrong, but I cannae see Barrett coming back from this one and still having that momentum he had so expertly built up since the start of the Bad News gimmick, and that’s a fuckin shame. Unless they keep him on tv daein the bad news segments, its deid in the water. No quite as deid in the water as The Chosen One is, but its fucked mate. Once this independence thing dies on its arse, Wade and Drew will form a heel tag team on the indies called “The Referendum” and as the YES! folk will spit pure unfiltered venom at them for ‘JEOPARDISING OUR COUNTRIES FUTURE!’ even though its fucked anyway. Been fucked fae the start mate. Don’t listen tae any of these politician dicks. They’re all in it for the expenses (aka cocaine and hookers) and cuttin oot all the snippets about them in the papers so they can masturbate furiously over them. I’m voting YES for 2 reasons. Daniel and Bryan. Fuck politics.

Other really exciting things happened on RAW, but I have one of my dedicated team working on a full, in-depth review, so I’ll leave it there for the RAW patter, and instead present todays video to ye. Which is something you all should have watched by now. Not brillaint camera work, but its the bold Uhaa Nation taking on Liam Thomson, and its STELLAR.

Buff Bagwell sings the blues for the outro. 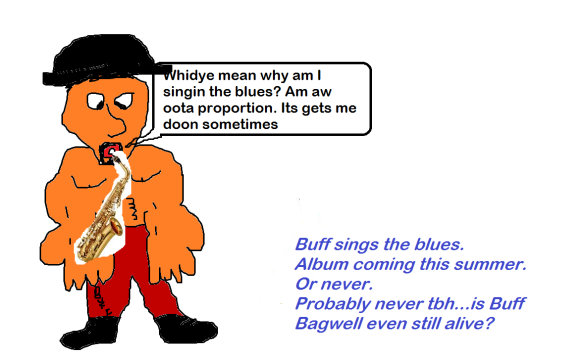