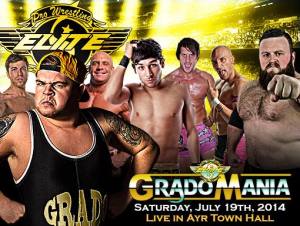 This might be it troops. This might be the moment it happens. Grado finally getting some gold roon that waist of his. If you read my shit, you’ll know I have an appreciation for folk who are good at what they do. If its goodies, baddies, inbetweenies and any other manner of cunt. As long as there’s a dedication to making it fuckin good, I’m intae it, and Grado is the best goodie in the game. He keeps ye invested in his story, even if you can occasionally grow tired of the same routine and thats part of the magic for me. The main reason that I don’t think there’s ever gonnae be a day where I don’t consider myself a fan. So this event might just be vindication for him. An event named after him, which is a bawhair off selling out. In his home town, AND he’s going after the belt? It all seems perfectly poised for Grado to have his moment. Grado going intae the lions den against big Dave Mastiff isnae the only thing on the card though. It’s fuckin stacked with good shit, so I’ll attempt to make that good shit sound even better with a wee preview eh? Aye fuck it. Let’s do just that.

Liam Thomson is red hot right now. Always been one of the best technical wrestlers out there, but he has a buzz about him and its about time. He proved how well he works with huge, and surprisingly agile wrestlers when him and Uhaa Nation had a scintillating match at the last PWE show, so this should be just as good. Mossy isnae quite as much of a flyer as Uhaa, but he moves extremely well for a big unit. A dark horse for match of the night I reckon. I fancy Thomson to sneak the win wae a wee bit of tomfoolery at play. Points at a guy in the crowd and tells Mossy he said “Mossy has raisin balls” and as soon as he turns roon tae scauld the cunt..BACKCRACKER. Game over.

The NAK vs Project Ego vs Kid Fite and TJ Rage

The NAK have been causin it for about a year and a half now, mainly in ICW, but you have a feeling that this might be the moment where the NAK signal their intent to take over Scottish Wrestling as a whole. They’ve been busy on social media in anticipation of this one anaw, mocking up an alternative poster for the show wae “NAKOMANIA” replacing Gradomania, and Renfrew cutting a devilish promo signalling their intent tae fuck shit up. We’re assuming is Renfrew and BT taking part in a run of the mill triple threat tag, but might we see the whole NAK? Or will nothing untoward happen at all and this yin goes just as scheduled? We shall see. Always good to have a chance to see Project Ego in action anaw. One of the best tag teams in Europe, even if one of them is a pematanned topman punter (its cool for me tae say that I think, some of my best mates are sunbed sallies) Fito and Rage are bad bastards in PWE, so it’ll be interesting to see the dynamic between them and the NAK. Theres a fair chance patriotism and heel solidarity will takeover, and they join forces to batter fuck out the English guys. Screaming VOTE AYE FUCKERS! after every attack they dish oot.

I’m sure Wolfgangs fuckin sick of it now eh? That’s twice in shows I’ve been to recently where he’s had his heid smashed in with a chair, and all the poor cunt’s tried tae dae is have a wrestling match. That’s it. Just out there doing his pro wrasslin thing, and people keep hittin him wae chairs. Assuming he’s still alive after the NAKs brutal assault on him at ICW – What’s Your Boggle, Wolfie will be attempting to exact revenge on the last guy to leather him wae a chair, the bold Joey Hayes, who turned on him at PWEs last show. The match they had before Hayes got lairy was a cracker right enough, and this should be no different, especially with a bit of heat between them. I fancy Wolfy tae win, and for HIM tae attack Hayes with a chair afterwards, whilst muttering “Hit me wae  fuckin chair will ye?” under his breath as he does so.

Seen far too little of all 4 of the ladies (I’m never sure how tae put that, is ‘ladies’ too formal? is ‘burds’ too familiar? its a delicate balance) involved in the match lately. So this one should be a fuckin stoater. Its a testimony to how blessed we are with talented burds (aye I went wae ‘burds’ this time and it felt awrite, we’ll stick wae that) in this country that you can stick four of the best together in a match, with no storyline heat between them (bar the long standing heat between KLR and Carmel) and it can instantly become one of the most eagerly anticipated matches on the card. Cannae fuckin wait for this yin. I fancy Carmel to win, but that’s for no other reason other than I’m a Carmel mark, and I’m intae that scowl she does, even after a win. Still looks at the crowd with pure unfiltered contempt. A heel through and through. No matter who gets the win, this will be proper womens wrestling. If you’re scunnered with the WWE total divas shite, this will be the perfect antidote.

There’s little you can say about this ‘feud’ that hasn’t already been said. Can you really call something a ‘feud’ is its built on mutual respect and friendship? These two have some of the most cohesive technically sound wrestling matches in Britain. Show stealers every fuckin time I’ve seen them wrestle. I’m yet to see their match in the final of the inaugural PWE Title tournament, but Andy Wild himself rates it as his best match, and considering some of the stoaters I’ve seen him involved in, that takes some doing. Noam Dar seems to be getting his momentum back after an injury plagued year, and I’m gonnae predict that this will be the match of the night. Grado might create the moment of the night (unless the NAK set the place on fire, changing their motto tae CARD SUBJECT TO BURN in the process) but this will be the best match. Intrigued tae see how the dynamic changes with Andy Wild being a big barrel chested, deadliftin bastard these days. The deadlift don I was gonnae call him there, but I’m no one for forcing nicknames on people. No me. Do NOT call Andy Wild the deadlift don.

It has to happen eh? I’m a huge Dave Mastiff fan, and I understand why having him as the champ makes sense. A well recognised, hugely talented, unique big man, but it’s for that very reason that it makes all the sense in the world for Grado to win this. If he’s gonnae be considered not just to be the charismatic funny guy who always entertains, but a legit threat to be a main event guy, he needs a win like this, and a belt round his glorious, slightly doughy waist. The show’s named after him. It’s in his home town anaw ffs. Nearly a sell out. It has tae happen. Even if he’s going in as the big underdog cause of how much of a bear Dave Mastiff is, the belief he’ll draw fae the crowd getting more and more vocal as he takes a vicious, calculated beating aff the big man, will lead him to victory in the end. If I’m coming aw the way tae Ayr for a spot of the wrasslin, I better go hame with all the joys in my heart, and those joys will come fae hearing “Life is a mysterrrry” ring out, with Grado hoisting the PWE Title above his heid. PWE celebrates its 3 year anniversary wae a full scale PERTY.

So aye. I’m not entirely sure if its sold out yet, but I do know it was very close tae a sell out, so if you want tae chance yer arm of getting a ticket on the door, be there early. I’m talking, get yersel in the queue for 8 in the morning just tae be safe. If you’ve already got yer ticket like the smart cookie I know ye tae be, I’ll see ye there. I’ll be the cunt wae the face. Ye’ll no be able tae miss me.