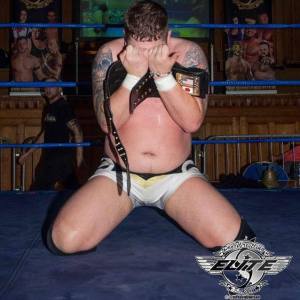 All credit to the incomparable David J Wilson for the photie

You hear a lot of folk talk about Grado these days. Not all in a complimentary way. I even heard some fanny spreading a rumour that he’s actually untrained (no gonnae give away the source, but it rhymes with GUY-CEE-DOUBLE-YOO BINSANE-VANS) and there is the odd rumbling in amongst those who think they know better that he shouldn’t be in the position he’s in. To those folk, I have a wee something to say.

If you’ve got a wee bit off Grado having been a big fan before, but maybe growing a bit tired of the same routine? That I understand. A lot of the time Grado does the same shit. I can understand a regular getting a bit tired of seeing it, but at the end of the day, he does it for a reason. It’s bridged the gap between the regular punter and the wrestling fan, so when a maw n da take their weans out for a night at the wrestling, and Grado’s on the bill. They want tae see Grado win. They want tae see Grado outsmart the bad guy after 10-15 minutes of said bad guy being a sneaky cheatin bastard, and giving Grado a bit of a tanking. They come along to be sent home happy. Grado gives them that, so if it isnae your thing? Don’t be arsehole. Dont derail what the man’s trying to do and be a smarky bastard. Dont fuckin boo. Not in that environment anyway. If you go to a family friendly show in the middle of Dumbarton to boo the faces and cheer the heels, then you’re in the wrong fuckin place. It de-rails the show. Confuses people who don’t see anything deeper than the show they were there to witness. A lot of wrestling fans think it’s a privilege to be a fan, and that outsiders are not welcome. If you don’t have a deeper understanding, YOU CANT STAND WITH US. It’s all bullshit. Without the casual fans, and the bandwagon jumpers, wrestling doesn’t make any fucking money. It’s that simple. If british wrestling was just for the diehards, it would be the same 200 people at every show. Without that gap being bridged, there is nae fuckin chance this ever becomes a full-time gig over here. Right now, it has enough momentum about it that it actually might. ICW have the attention of a wider audience, and that trickles through to the rest of the Scottish Scene positively. PCW and PROGRESS both have the attention of the adult market down south, and that also trickles through to their smaller promotions. Everyones winning at the moment. Even with that, there’s still a wealth of top class wrestlers who can’t call this a full-time job. Some of the very best at what they do, and they still have to work a day job. Without guys like Grado getting the regular punters through the door, the chances of that being in the past for good just does not exist. Wrestling is niche and always will be niche. WWE monopolise the regular punter market. That’s why guys like Foley and Zack Ryder sharing the video of Drews return means so much, and it really disnae matter a fuck what some narrow-minded fandans say about the size of the ring, or anything else. There’s nae denying that moment. There’s nae denying that pop. There’s nae denying ICW has…it. And the whole world got to see it for once.

As for Grado, if you aren’t enjoying him currently, I’d like tae make a case as tae why that’s fuckin stupid. Not only does he get the punters in, he isn’t doing it in a Hulk Hogan type of way, where everycunts sittin on their hands waiting on his match. He usually has a match in the mid, to upper mid card, does his shit, and lets the rest of the card breathe. He does his shit, and then Joe Coffey puts on wrestling clinics with everyone. He does his shit, and Chris Renfrew, BT Gunn, Divers and Darkside come out and heel it the fuck up. Destroying everything (occasionally Grado himself) He does his shit, then Jack Jester retains. He does his shit, and everyone else does theirs. He never steals focus, or makes segments that are nothing to do with him, about him. Thats why when someone needs a run in from a face, more often than not, its not him. The Bucky Boys needed good guy hauners at Shugs House Party, and where was he then? Nowhere, because him coming out would have detracted from the moment. If you look at some of his recent matches, and don’t appreciate them for the wrestling produced then to me, ye just don’t get it. To me his matches with Mikey Whiplash are a level above everything else, in terms of physicality and storytelling. He also has tremendous chemistry with Red Lightning, but some of his recent stuff in ICW particularly has been some of his best in terms of storytelling. Him vs Davie Blaze at PBW in Dumbarton is when I first noticed it. A classic hero vs villain affair, where the bad guy lies, cheats and steals his way through the match. Using his his size and strength advantage to stay on top, before Grado has his rally, looks set for the win, and then he actually loses? That’s the beauty of it tae. Sometimes he loses. He was outsmarted by Liam Thomson at a recent ICW show tae, and not only do those loses do a lot for the ones who pick up the win, they humanise Grado. They make wins over guys like Whiplash, Mossy, Dave Mastiff and Sha Samuels seem real.

And when you look at the matches he had with those four, it completely blows any suggestion that he can’t wrestle out the fuckin water. I honestly didn’t see any match he ever had coming close to the stuff he done with Whippy, but I implore ye tae watch his match with Sha Saumuels in London if ye can. A storytelling masterclass with no comedy spots whatsoever. Just a really big scary cunt, kicking Grados teeth down his throat, before Grado says NO MORE, and gives him a few sare yins of his own. Him winning that match was a beautiful moment after the beating he took, but more importantly it made SENSE, just like him losing to Liam Thomson did. Just like him looking like he’d won the Square Go, before Renfrew jumped in and papped him out made sense. Renfrew is now considered the baddest cunt on the fuckin planet, because he stole your moment. He heard that ear shattering pop when Grado looked like he’s won it, and he shovelled 10 tonnes of shit all over it. Without a guy like Grado bridging the gap between the regular cunt who couldnt give a shite about wrestling usually, and the diehard fan. Moments like that don’t exist. Moments like Grado overcoming the brutish Dave Mastiff to win the PWE belt dont exist either. A pop that united all age groups. A moment that he earned, and more importantly he deserved. He deserved it for giving us all the entertainment that he has over the past 2 years. Slag the youtube shit all you want, but theres no denying its some of the finest comedy work in the wrestling scene today. ANYWHERE. Thats why folk like Colt Cabana gravitate to him, because it’s the same thing he does, just with a different slant on it. An Ayrshire twang. He’s there for the fans. He bursts his arse travelling up and down every wee toon ye can think of for you.

So if you dislike Grado cause you aren’t a fan of his work? Fair enough. But if its cause you no longer think its “cool” to be a fan, then you’re a bigger arsehole than those who just show up to see Grado. Know why? Cause you should fuckin know better. You’ve supported and claimed to understand wrestling for years, yet you struggle to grasp basic shit like that. THEY aren’t the problem. The ones who don’t get it, but show up to let Grado do his thing and make them and the weans happy. They aren’t the arseholes in this situation. Its you. The know it all. The “smart” fans. Its yersells.