“YOU AINT BEEN HUNGRY SINCE YOU WON THAT BELT!”

Bete Noire and Viper vs The Owens Twins

Got a feeling about this yin. The Garage lends itself to a right good brawl. The Owens Twins proved their brawling credentials at FFs a few months back. Bete Noire knocks cunt’s teeth oot in her sleep, and replaces them wae thumbtacks, in what is some very niche amatuer dentistry, and Viper is as game as they come. Battering everything from burds, tae boaysies, tae Euan G Mackie in her time. So I reckon this will be a proper scrap. Four of the most combative lassies in wrestling going for it. Or it’ll be a technical masterpiece, played out entirely in the middle of the ring. All legal tags. Not even a hot tag to draw focus away the intricate technical action on the go. But nah. Scrap. I’m going for a right good scrap. The Owensies prevailing, with Bete Noire and Viper heidering each other in the aftermath. No cause they’ve fell out, just cause that’s what they’re intae.

I’m personally a wee bit high on ma Lewis Girvan supply these days. Anytime I see him he’s on point. Match wae Joe Hendry at Pride last night was fucking excellent. Him and Kenny Williams at SWA was superb tae. He’s been giving us the whole repertoire of his wrasslin goodness up and down the country for a while, so its only right that he’s right back in the mix ICW wise. Even for a young yin, he’s been on the main roster radar for ages, and proved his adaptability when he was a late replacement for William Grange last year and worked a belter of a match wae Grado. So why’s it not happened for him so far? Why’s he no making that Kenny Williams money? Maybe cause he’s a bit serious? All business type of dude, wae “pro wrestler” on his gear. That’s how he identifies himself and thats admirable but its no reaching out to the masses. Whit tae dae is, have “roll over beethoven” as yer theme, and come tae the ring with 2 St Bernards. That’ll gie ye that quirky x-factor ye need to get over. Solar is a peculiar case, cause he seemed pretty much secure on the main roster, then dropped off the map a bit after injury. Hugely talented wrestler anaw, folk go on about him being a bit skinny, and that does hamper him a bit. A win over yer Mark Coffey type of guy just wouldnt be believable unless the finish was heavy was interference n that, but one of my favourite matches of last year was him vs Wolfgang, so he’s certainly capable of working with, and having great matches with bigger dudes, the problem wae him is more making him a believable opponent for them.

Havered fuckin pish there, very little of it about the match itself, which will of course be stellar. Cause they’re both very good at wrestling, and as far as I’m aware this is scheduled to be a wrestling match. Gid gear.

Whatever happens here is gonnae be monumental mate. Huge. The launch of a new single maybe? The issuing of an open challenge? I seen patter about the challenge being global, so I can only assume that means it’ll be answered by Layla Rose (she’s Swiss ye see) and they’ll have a Fallaway Slam competition. Whoever can get their opponent in the Clyde wins. Aw fuck. Here it better no be Tommy End. I’m no mentally or physically prepared for that. We should all get at least 4 weeks notice before having to see Tommy End in person. I love uhm n that, but fuck me. Skerreh as fuck. He’s a skerreh boay.

Nae idea what to expect from this, so i’ll continue throwing out unlikely scenarios. JOE HENDRY HAS A DANCE OFF WAE LOU BEGA! Complains that its a fix cause the tune they’d tae dance to was Mambo Number 5. Or eh……I dunno. Joe Hendry will be there anyway. Making Spacebaws better. For ICdubble. Me. And. You. If Lou King Sharp answers it, it’ll be him in his valiant good guy PWE role, and that match will be bananas. Besta gear. If this isn’t where Lou King Sharp appears, it’ll probably be….

If THIS is where the bold Lou King Sharp makes his debut I’m convinced he’s winning it. If they dae the screamin wee fanny character that he does in PBW, its got Polo Promotions written all over it. Not cause its in keeping with the high levels of decorum the Polo Promotions lads practice, but more because its a project for Jackie Polo. Fine tuning this clearly talented, but temperamental youngster, and getting the best out of him. I kinda hope it isnae him though. Lou King Sharp is definitely strong enough as a character to make his own way, but theres a few who could benefit hugely from affiliation wae Polo and Coffey. Guys like Tommy Marx and Saqib Ali. Who’ve been about for ages, and clearly have the talent, but maybe need a wee bit of faith shown in them. Could even be someone like Christopher Saynt, another’s who’s been knocking on the door for a while, and a guy who could use some hauners against that bible bashing big bully Davey The Beloved. Or they might swerve it completely, stick Sweeney in there and have him tear them doon fae the inside. Fuck knows man. All I know is that someone’s gonnae be on the Polo Promotions payroll by the end of it, and that excites me. The family grows. Meaning it grows more powerful. Meaning world domination is imminent. CM Punk, Prince Devitt, Jack Jester and Joe Hendry are amongst the names already put to the sword by the current regime, imagine who they could go after wae a new recruit. They could batter The Big Show. OR GODZILLA. Possibilities are endless mate.

The NAK are coming to do…something. I’m no sure whit yet, but it will indeed be wrestling related. I’m gonnae check the event page to see if theres anything specific. Haud on. Nah nothing really. Its Renfrew on the mic though. I reckon he’s calling someone out, or maybe he’ll perform a ritualistic live murder, making they scary as fuck SDS video promos look like episodes of barney or suhin. Someones gettin fucked up anyway. It’s the NAK. Someones getting a doing. Even if they cannae find anyone to batter, Renfrew and Divers will probably have a scrap just for the fun of it, while BT Gunn superkicks everycunt in the front row. 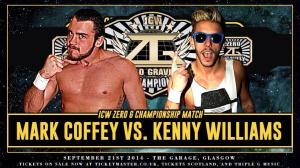 Even if yer one of them who wasn’t sure about going to this show, this should’ve sold ye. This here is gonnae be one of the matches of the year. I’m certain of it. Given a main event slot and a decent amount of time? They’re gonnae scorch it. It’s also the very first time since the lights cut back on and Fergal Devitt appeared on the top rope all those months ago and reduced hauf the ABC tae a pile of human rubble and tears, that I believed Mark Coffey MIGHT drop that shiny belt. For me it would legitimise these shows instantly, and pass the torch to a guy who’s clearly red hot and about as over as anyone in Scottish Wrestling. Giving Mark Coffey the chance to move on up the card. It’ll happen one day, and if he’s gonnae drop it to someone, it should be his quiffed magnificence. It should be Kenny McFly. Having said that, I just don’t think its time. No yet. But its refreshing to be looking forward to a Mark Coffey title defence where ye dont reckon the big man’s gonnae make short work of whoever he’s in there against. I always enjoy his matches, but I reckon this one will have something special about it. A lot of close calls. Near falls. Sare submissions where yer lit that tae yer pal “he’s tapping here” then when he disnae tap yer more lit that “I really thought he was tapping there” All that good stuff. IF Mark is to drop it, I reckon it’ll be with the aid of a wee surprise distraction. Maybe from Joe? Maybe from Mike Quackenbush? Who fuckin knows.

I say this with caution cause I don’t have a ticket yet myself, but there’s tickets on the door if you want to come. Please don’t buy them all. Buy a lot of them, but make sure there’s at least one left eh. Starts at 7. The Garage. Glesga. Dae it.