When Insane Championship Wrestling descend upon Newcastle for the second time in the first date of their much anticipated Magical Mystery Tour, we’re sure to have hard hitting slams, spine shattering suplexes, ferocious figure fours, chest altering chops, and brain bashing bulldogs! Moves, storytelling and alliteration all meshed into one majestic wrestling supershow, fun for all the (Over 18) family.

I suggest you untie your steel toecap boots, remove them, replace them with a pair of wafer thin Asics gutties, and START LEATHERING CUNTS WAE THEM. Because if this tour is gonnae be one thing, it’s gonnae be carnage. And carnage disnae need cliched hype like the first paragraph there, it needs words that pull themselves up yer drainpipe, keek their boisterous heids out and go “HAWL YOU! MON N SEE THIS WRESTLING SHOW”

If you’re a local reading this, or more likely one of the Scottish team on the fence about taking a jaunt down. Fuckin dae it. Card is probably my favourite of the year on paper, naw not probably, it fuckin is. Look at it. Seriously, have a wee glance below, then come back up and read the rest of this intro…ye done it? How good is that fuckin card. Oh lawdy. Another reason to shift yer dick on tae that megabus and shimmy on down is that Newcastle is like Glesga wae (slightly) less tooth decay. Newcastle is like a version of Glesga where the junkies don’t limply ask for spare change tae eat. They openly ask ye tae contribute to the day’s lager fund. It’s an honest city. A city primed and ready for shenanigans, and ICW’s gonnae make another deposit this Sunday. Roll the fuck up troops and troopettes. Its the magical mystery tour!

Let’s not dwell on how much of a brilliant wrestling match this will undoubtedly be. Not yet anyway. Although fuck me, it will be braw. Kenny Williams first defence of his shiny new belt in Newcastle, against one of the top talents in the UK? Aye. I’ll huv that. Drizzle some Reggae Reggae Sauce on it wae a has brown on the side. A slice of deliciousness. But we’re not dwelling on that. Not yet. Even though I totally am dwelling, we aren’t doing it. It’s no about that. It’s about the fact that Kenny Williams comes out to The Power of Love now right, that’s poptastic. That has men, women and children alike stiff nipped, and stiff everywhere else, but we all know that. What some of ye might not know, is that Scurll comes out to Pretty Fly For a White Guy anaw, meaning we’re all gonnae be so spent from break dancing, and screaming lyrics intae each others ears that we might not even see the fuckin match. If we do, it’ll be rerr. Kenny will likely retain, but it’ll be heart stopping, wipe the sweat fae year brow, doctor doctor, gimme the news, I got, bad case of loving this match type shit.

Never done fawning over Mark Coffey eh. If ye didnae go to Spacebaws by choice, and you missed Coffey vs Williams, you’re very silly indeed. It had everything a main event should have but unfortunately for Coffey it also had him dropping that shiny bet he held so dear. Only way to get that out of his system is by pumphandlin some business (see what I did there? naw? ye dense mate?) against my man Stevie Boy. Stevie is fairly similar in style to Kenny, and has been making a big of a splash in ICW outwith the Bucky Boys, so he’ll be looking to build on his win over Renfrew here. A lot of stating the fucking obvious here eh? So tae finish in the same vein…this will be really fuckin good. I can’t envisage a scenario where two of my favourite cunts get in the ring and it’s not brilliant. Idealism is pretty handy when it comes to wrestling, makes shite things less shite, and really good things even…eh…gooder. (BETTER! Thats the fuckin word…better)

Ach ye know the drill by now with this magnificence. Best of 5 series, and this is the 4th different city its been in, as brilliant as it would be to see the 5th one tear The Barras a new arsehole, best of 5 in 5 different cities would be some proper unique shit. Very intae either of those scenarios unfolding, but that’s making the probably unwise assumption that it’ll go tae 2-2. Never assuming anything in ICW. Except making the assumption that Joe Coffey vs Noam Dar will be stoating. That’s safe enough I reckon. I fancy this to be the best of the bunch, all 3 matches have been unique tae, Edinburgh so far being my favourite, but I reckon this will have some proper storytelling goodness. Overflowing wae near falls, and pained cries of “THAT WIS THREE!” It wisnae three mate. It never fuckin is. Until it actually is….

See what I mean? Spoiling us this card. It’s hard to be low-key about anything when shit like this is happening and no one’s even really talking about it. Pretty fucking obscene that eh? Mossy vs Wolfy and it’s almost an after thought. Fuck that noise. Get yer gums in and around this juicy slice of heavyweight warfare. Where Mossy attempts to leather one of Grado’s best pals, since Grado overcame him at Shug’s. Or if yer looking at it another way, it might be Wolfy looking for revenge on Mossy, for him knocking 17 shades of dung outta Grado at the last Newcastle show, but one thing’s for certain. Someones getting hit really hard here. Probably multiple people. Fancy Wolfgang to win, unless there’s NAK shenanigans. Fuck sake, could ye imagine Johnny Moss joining The NAK as some sort of silent enforcer? Pants would be shat across the globe at the thought of it.

It was around a year ago I first seen Rampage Brown wrestle, and its with great embarrassment that I say, I didnae have a fuckin clue who he was. This was before I was properly into British Wrestling, and at that point I only really knew ICW guys, so when I went to SWA Battlezone, I had nae idea what to expect from Rampage Brown vs Joe Coffey. What I got was one of my favourite matches of the year. A believable, hard hitting, fucking gem of a battle. Since then I’d definitely regard Rampage Brown as one of my favourite wrestlers in Europe. It’s a simple but effective way to go about your business in wrestling. Hitting people and making it look fuckin REAL. He does that better than anyone if ye ask me, and for his size, he has a fluidity about his work that I’m very much intae. In there wae Kid Fite, who’s quietly been outstanding pretty much all year? Aye…I’m very very intae it. Rampage Brown has ICW written all over him, so who better to test his credentials against than a guy who’s appeared on more ICW shows than anyone. I fancy big Rampage to win, especially if he’s gonnae be a regular fixture in ICW, which I really hope is the case. 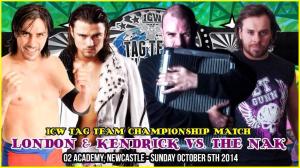 Dream. Fuckin. Match. I wasn’t sure where ICW were gonnae go with the London and Kendrick thing after surprising everyone and booking them in two singles matches at Still Smokin. It worked perfectly tbf, with Joe Coffey and Kendrick providing a stellar opener, and London vs Fito having us all eating out the palm of their hands, but I was hoping for tag matches on this tour. At least one anyway. This fuckin one. Right here. The NAK vs London and Kendrick. Belts on the line. In front of a non-partisan audience anaw? ooft. The NAK are gonnae get booed out the building I reckon, with a merry band of Glaswegians somewhere near the front still throwing up the NAK sign, but to non regulars like much of this crowd be, all they’re gonnae see is bad bastards. Rottweilers who have morphed intae murderous humans. Up against a coupla bouncy charismatic American heroes? This will be red hot I reckon. As hot as any ICW match has been on tour crowd wise. It has all the ingredients to be a fuckin stormer.

See now. This is intriguing. Everyone’s just assuming Jack Jester vs Drew Galloway at The Barras is happening wae the belt on the line, and I think it probably will, but there’s 5 shows on this tour, and Renfrew only has until next years Square Go tae cash in, so who’s to say when that match does happen at The Barras it’ll be as scheduled? Maybe Renfrew cashes in, defends against either one of them and drops it. Or maybe Renfrew cashes in and threatens tae set the belt alight, tie it roon a junkie and sling the whole neat wee package intae the Tyne, and the only way tae stop that happening is for the biggest match in Scottish history to include HIM. Triple threat. Renfrew vs Drew vs Jester. Getting a wee bit ahead of ourselves there like, but with the challenge of Big Damo and Liam Thomson in the one night for Jester? It’s another huge hurdle for the champ to overcome. Maybe a bridge too far. I could see Damo coming close anyway. He’s talking the talk, we’ll see if the bear can walk te walk. And I can see Thomson coming within a bawhair of stealing it, before Jester retains and that tension buils. The looking over yer shoulder starts. Waiting for the roughians to rush the ring. The bad guys. Renfrews waist wae mare gold roon it than Razor Ramons neck. As fun as it is tae dream up these wee scenarios, I cannae see past Jester retaining.Jester vs Galloway for the belt will be red hot in The Barras, so I cannae see a scenario where that match disnae have the belt involved.

Newcastle eh. It was mild to severe carnage the last time, so ye throw some Rampage Brown, London and Kendrick, and probably a Molotov Cocktail intae the mix. Someone’s gonnae end up partially maimed. On the sharp end of a sare erse at least. Come tae the show. Come tae all tae the shows. Dae it. Roll Up. Its the Magical Mystery Tour.