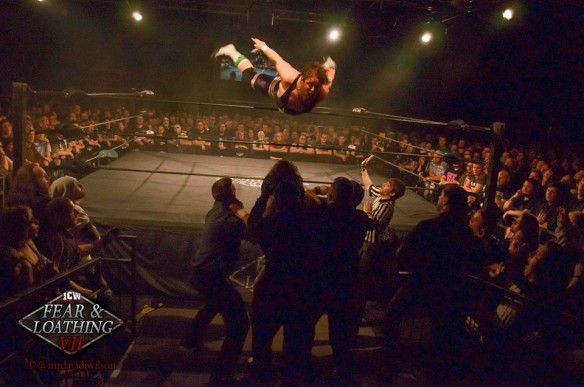 Dearie me. This is it eh?

There are very few matches in wrestling that can give you the feeling Wolfgang vs BT Gunn in a steel cage does. With the rivalry coming to boiling point, having seen them knock the utter fuck out of one and other for the best part of a year, this is the one. The brutality that was the Dog Collar Match will look like a stroll in the park with the dog after this. The last man standing match will look like some sort of really violent two-man yoga session compared to this. Even the massacre of Wolfgang in London will look like a surprise party compared to the pain these two are going to inflict on each other this Sunday. Renfrew vs Drew has a prize-fight sort of feel. Fuelled by the drive to win. Fuelled by mutual respect, and mutual disrespect at the same time. BT Gunn vs Wolfgang is a wee bit different. BT Gunn vs Wolfgang is driven by the basic human emotions we all experience in life from time to time. Frustration, unrequited love and the innate desire to knock fuck out of your cousin. 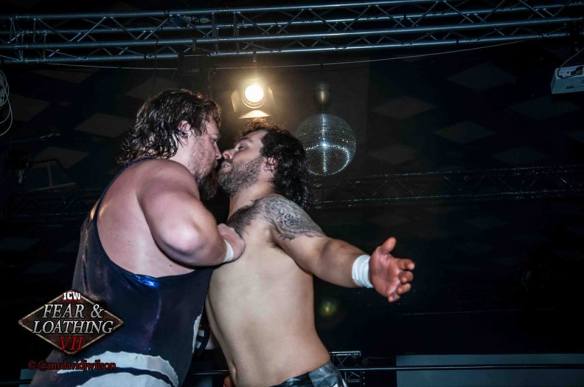 A lot of folk are speculating on how the fallout for this might go. Will BT turn on the NAK and re-unite with Wolfie? Will Wolfie open his eyes? Will one of them enter the Square Go and win after coming near death during the match? Will one of them answer Joe Coffeys Iron Man Challenge and lose 10-0 cause they’re so burst? To me, as much fun as it is to speculate on what happens next, the only thing that truly matters is the match itself. I defy you to find a match anywhere in the wrestling world that is driven by such a depth of emotion as this one is. Fear and Loathing would have been a great setting for it to end, but Fear and Loathing was too soon. Even during that tear inducing masterpiece of a match, it felt like there was another chapter. One more battle, and that battle would not be a wrestling match. Have any of their matches been proper wrestling matches really? There’s no words for how engaging that Dog Collar match was, yet there wasn’t a wristlock or tie-up thrown in anger. Even that brutality will look like fluff compared to what’s going to happen at the Square Go. I try not to talk directly to wrestlers when I write these things. Its completely unbecoming, but to Wolfie and BT. If yer reading this pile of wank. I suggest you phone all of your mutual relatives at some point this week and let them know they might only be able to enjoy the company of one of you at future family functions.

Wolfie mate, a fly just landed on yer back, mere n I’ll get it for ye

A very small part of me feels like this might not be it either right enough. If they both make it out alive and no one opens any eyes, how can it be over? They’ve both poured so much aggression, violence and in a strange way…love into this feud. How does that ever end without finality? Either they unite as one, or one of them no longer exists. Wrestling feuds tend to just die out. Particularly in WWE these days, where you can end an emotionally charged feud at a PPV, and start yer next one on RAW the next night. How could BT and Wolfie do that? How could they battle each other to the point of mutual extinction and then move on to the next wrestling thing? There has to be something that ends it for good. A loser leaves his beating heart in the ring match. Literally, the winner gets to rip the heart clean out of the loser’s body and leave it there for all to see, as the loser somehow trudges out of the arena dejected, heartless. Cold……Deid.

Whilst every single match on the Square Go card is a main event waiting to happen, make no mistake. If this one is done correctly, it will steal the show. That’s no disrespect at all to Renfrew, Drew or Joe Coffey. I’m sure they all know what I mean when I say that. Wrestling is driven by basic human emotions. Always has been, always will be, and nothing speaks to the paying punter (aka me) more than family warfare. That’s why brother vs brother feuds always garner interest, even if the matches are fuckin pish (Matt and Jeff Hardy, lookin at yous troops) so as much as Renfrew vs Drew is at fever pitch, and will undoubtedly blow the fuckin roof off the place on Sunday, it’ll be a patchwork roof they cobbled together after BT and Wolfie blew it off earlier in the night. No matter what the outcome of this war is, it’ll be something the two of them can sit down and tell their weans about in years to come. That time I battered yer Uncle Tam until his eye socket was dangling somewhere near his baw socket. That time I hit yer Uncle Barry with so many suicide dives, he swallowed 5 of his own teeth. That time I ended up in the jail for dragging your uncle outside the ABC, opening the door of a first bus and chucking him in it, demanding that the driver charges “whatever the price is to take a wanker straight to hell”

I don’t believe Tam and Barry hate each other really, but if you’re at that show on Sunday, you’ll certainly believe BT Gunn and Wolfgang do.

All credit as usual to David J Wilson for the photos that make the words do a merry dance.