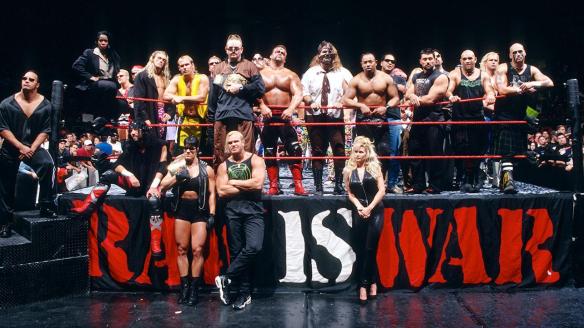 A lot of people suffer from Attitude Era Syndrome.

It’s this mad romanticising of probably the most celebrated and successful period in worldwide wrestling. Stone Cold – mind him – what a guy. Beers and vickys and stunners and look there’s the rock in his mad trackie that he wore because he was getting his Samoan tits reduced. What a time. Memories.

This is kind of a tie-in with ICW I suppose – with it being likened to the arena of early teenage stauners and swear words you didn’t quite understand at that point (leading to you calling your auntie a ‘Ho Train’ and telling your granda that ‘his ass was grass’ and that you were indeed ‘gonnae smoke it’).

However, I’ve been watching through 1999 WWF – Raws, Smackdowns, PPVs, the lot – and I’ve come across some pretty shocking evidence that has brought me to quite the conclusion.

A lot of The Attitude Era was fucking shite.

Now, I can hear you shouting that my ass better call somebody and that, quite possibly, I’m a roody poo or something (fucks a roody poo anyway?) but hear me out.

I’m going to – at random – pick a fucking toilet aspect of the attitude era in order to pad out this argument and win you round.

The Story of the European Championship and the Various Mad Things Associated With It In The Year Of 1999. 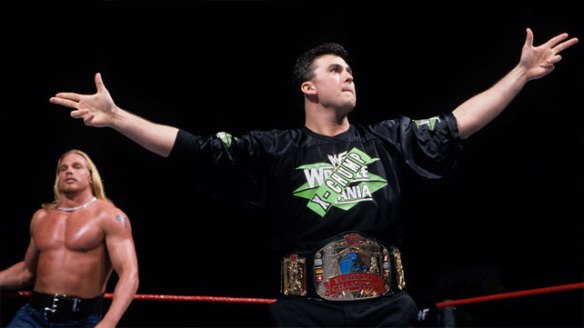 Right I cannot for the life of me be arsed doing accuracy checks on all of this so you will just need to bear with me, but folk complaining about titles meaning nothing these days would have an aneurism at the state of belts back then. Gold flying back and forward raining down on folk like a shower.

A massive golden shower of titles.

Let’s take the European Title. Early in the year Shane O’Mac is knocking about with it because he’d done in X-Pac and won it off him, which is fair enough.

They have a match at Wrestlemania 14 and Shane is your champ. A few weeks later Shane has decided he’s evil and best pals with the Undertaker who’s trying to rape his sister and steal the company off his dad (who then reveals that he was in on it the whole time so he was really trying to steal the company off himself and rape his daughter while his son watched so that’s cool).

Because of this, he’s now just left the belt in the house and canny be arsed bringing it to shows – much less defending it within the statutory 30 days laid out in the official WWE rules and regulations.

All of a sudden, up turns fucking Mideon (used to be a pig farmer, now possibly pig fucker wearing things with big eyes on them. Illuminati confirmed probably) stoating about with the thing. McMahon -who had retired the championship according to Wikipedia – awarded it to Mideon after ‘finding it in his duffel bag’. Just forgot about it probably, under a pair of socks and some pre-workout or whatever. Sound, I’m still on board.

‘You’re looking at the real deal now. I’m a kick your sorry ass out on the streets.’

That’s not my words Lynne, that’s the words of D’Lo Brown; the head shaking black maniac who won the title off of Mideon to become the first Euro-Continental champion. So he was the champion of quite a few continents but no the world just yet.

Soon after, he lost both belts to storyline woman beater and puppy enthusiast Jeff Jarrett.

He also paralyzed a guy called Droz whose thing was going about and whiteying on people while his big hairy pal (a kind of Han and Chewie deal) named after a cock piercing held folk down and tattooed their arse. Ok.

Jarrett couldn’t be bothered being European Champion though, so just gave the belt to Sexual Chocolate Mark Henry.

The belt was a welcome reprieve for Henry, who had spent the better part of the year being fat, getting blow jobs off of trannies and courting an 80 year old woman who he would later impregnate. The ‘baby’ would be a human hand.

So Mark Henry is the champion. That’s the main thing. Except he loses it back to D’Lo who helpfully informs us once again that we are indeed looking at the real deal now while shaking his head.  All that head shaking was for nothing though, when D’Lo lost the belt to the recently returned British Bulldog.

Now, the British Bulldog is one of the most successful and well known wrestling stars in history. He main evented Summerslam 1992 in Wembley Stadium in front of 80,000 people – beating Bret Hart for the Intercontinental Title. His return should be a pure big deal eh? Coming back from a pure shite run in WCW, looking jacked to the gills with a penchant for pills, the Bulldog was ready to take the WWF by storm.

So obviously, here he comes wearing a pair of jeans and a pure Pot Noodle stained jumper in the middle of an episode of Smackdown to beat the Big Bossman for the Hardcore Title.

Instead of pressing charges, Al Snow logically challenged the Big Bossman to a Kennel From Hell Match later that month.

The Kennel from Hell was a cage match inside a Hell in a Cell. The Hell in a Cell match was still a pure big deal at that point, as was the cage match, so combining them could potentially have been a right huge thing reserved for a massive main event.

But naw, because Vince Russo.

So they stuck a bunch of dogs in between the cage and the cell and they proceeded to shite all over the floor and hump fuck out each other. The dogs did the same hahahahaaha jokes sorry. The match was a fucking abortion though. And that was that. The Big Bossman went onto fight with The Big Show for the title because The Big Shows dad died of cancer and the Bossman stole his casket at the funeral.  Whatever, get over it.

Anyway, back to the European Title. Yer man Bulldog had it for a while but he was busy getting Rock Bottomed into actual poo by The Rock or leathering Stephanie McMahon in the head with a bin causing her to get amnesia and forget she was meant to be getting married to Test. She would later be drugged, raped and married to HHH who then took over the company. They then got together in real life and married and lived happily ever after so that’s good.

It ended the year in the hands of Val Venis, who had thankfully recovered from being castrated by a mad Japanese group who threatened to, and I quote, ‘choppy choppy your pee-pee’ after he got caught pumping on of their wives. He was then saved by the actual John Wayne Bobbit who’s missus had ACTUALLY taken his knob off.

However, all’s well that ends well. Free circumcision. European Championship and the dawn of a new millennium.

All of that actually happened in exactly the manner in which I suggested. This was just the storylines concerning the Euro Championship and its surrounding bits and pieces. I am barely scratching the shitey surface. This wasn’t wrestling, it was a car crash. It was Jerry Springer on acid. It was toilet.

Awch, fuck it, it was amazing.

Cheers to Gary for submitting this tidy piece of wrestling writing. I enjoyed it so here it is. All credit goes to Gary for the words, and to Google J.Wilson (soz force of habit) for the photos.