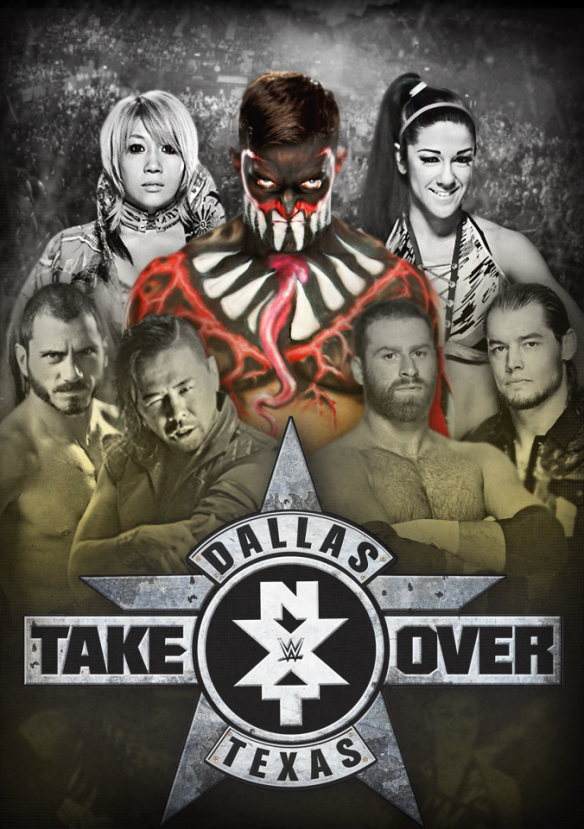 Preview daft on here lately eh. Today is NXT TakeOver in Dallas, and its gonnae be wrestling as fuck. Nakamura is the most wrestling of aw the wrestlers after all, and he’s gonnae make men, women, children and dugs cry at his beautiful entrance, only for the entrance to be surpassed by his beautiful ring skills, and then for those to be surpassed by his shoes. I assume anyway, never seen his shoes aside fae the ones he wears in the ring but I bet he has the dopest shoe collection. There is other wrestling happening. Sorry for havering about Nakamura but he is Nakamura and that makes it sound. Due to how Nakamura he is.

Aside from that other matches are happening. Here’s a rundown of those matches, with liberal mentions of Nakamura to be sprinkled throughout. I’d try and stop that happening, but why deny yourself joy? I started writing about wrestling because it was fun and writing about Nakamura is fun. Did I mention Shinsuke Nakamura is on this card aye?

So much Nakapatter, it would be neglectful if we didnae wax lyrical about a bitta Austin Aries as well. Its cool as fuck not only having him in NXT, but having him stuck right in about a fanny like Baron Corbin from the word go. I get that the Anti-Indie thing is a good gimmick for Corbin in NXT and it will at least make him interesting but the other thing it will do is put him in there with a lot of guys who are much better than him at wrestling, and thats some sink or swim shit. Does he have it? I kinda hope he does as he’s certainly the most promising of these ex NFL/any other American sport guys who come in with nae wrestling experience, but Aries could wrestle so hard around him he gets dizzy and coughs up a lung. One lunged guys generally don’t do very well in wrestling. Due to being dead.

Prediction – Austin Aries wins, Baron Corbin has his best match in NXT, and it all gravy. Baby.

Not even loving big Apollo more than yer maw loves scoopin wine oot the box makes this interesting. Maybe there’s something else to him, I really don’t know, but if there isn’t lets analyse what we know about Elias Samson so far. He’s a “drifter” who can be found in the same place every week. He has a guitar but is yet to break it intae wee bits over someone’s napper. He looks like the actor/comedian Chris D’Elia yet he isn’t Chris D’Elia. He disappoints on all fronts and I don’t fucking buy the drifter thing because even if such a lifestyle exists, it disnae look a fuckin bit like Elias Samson. Who can’t be a drifter cause NXT IS ALWAYS IN THE SAME PLACE, AND DRIFTING REQUIRES MOVEMENT FROM PLACE TO PLACE REGULARLY. Apollo better smash the living fuck out this diddy or I’m done with wrestling. I swear. Completely and utterly done. Until Sunday.

Prediction – Samson wins by slipping Apollo a mickey and serenading him to a deep sleep.

The Revival vs American Alpha

As much as I really wanted to see Enzo and Cass finally take they tag belts, this makes more sense. This is the perfect feud and the perfect matchup and I just fuckin love everything about it. The Revival being a smashmouth, kick yer teeth so far in ye wind up pickin them oot yer foreskin, team who dae fuck all flashy bar their finisher that actually looks like it straight up murders cunts. THAT’S how to get a double team finisher to look deadly, by doing very little else that looks devastating and finishing it off with a mad mid air double team multiple rib breaker. As for Gable and Jordan. Gable’s charisma makes two guys that could easily have been forgettable become the most engaging characters on NXT. He looks like a performer who loves wrestling, and lives wrestling every day in life and big Double J feeds aff it and looks 100x better than he ever did before. Feels weird saying this on a show where Nakamura debuts, but this could push his match all the way for MOTN and he’s NAKA-FUCKIN-MURA. Hope Dash and Dawson hold on to them cause if they drop them, that might mean they’re moving up and as much as I don’t ever really buy in to this “the main roster will ruin our NXT darlins!” mentality, if they aren’t pushed as serious contenders a lot of their allure will wear off and they’ll start looking like nothing more a pair of mechanics who are bonded by their mutual love of chewin tobacco and mutual hate of their own children. In fact, that might make them even more compelling. Forget aw that shit I said.

Firing it oot there. Shoot me down if you so wish. Bailey is the best NXT Womens Champion of all time. She’s the best because since winning it she’s had that IronWuman brilliance with Sasha but apart from that, who’s she been put with that you’d say is a standout talent? Pretty much naecunt. Nia Jax seems one dimensional and frankly a bit pish, but against Bailey? Told a brilliant story and looked like a legit monster before Bailey overcame the odds and wore her big maw erse down. Carmella has improved a lot but still isn’t the most gifted in the ring, yet her match with Bailey was also compelling as fuck. Even Eva fuckin Marie looked like a semi functional human against her. So ye put her in there with one of the finest women’s wrestlers EVER and what’s gonnae happen? A tonne of good shit thats what. Strongest of aw the styles. Would be sad as fuck to see her drop it but there’s nae doubt that if the NXT burds are getting their chance to shine on the main roster, Bailey needs to be a part of that sooner rather than later. In fact, so does Asuka.

Prediction – Mad Asuka kicks Baileys heid clean off then winches it. Or she wins via pinfall. Whichever you prefer.

It’ll go on last but I’m not putting it last because its not the main event is it. I love Finn Balor more than most other wrestlers. Actually asked him for a photo after an ICW show once, and I generally don’t like doing that in case yer bothering folk or whatever. Didn’t give a fuck if I was bothering him, I needed that photo and it still exists somewhere. Point is, I love him and he’s the champ but he’s not Nakamura making his debut. Nakamura making his debut is probably the only thing worthy of main eventing a show ahead of Finn defending his title and unfortunately for the Finnster that’s exactly how its going down. I also don’t consider this the main event because Finn should be involved in nothing but glory and sadly I think he’s dropping the belt. Joe’s not hanging about NXT for nae reason, he’s clearly a main roster guy waiting to happen but there must be a reason he’s been in the title picture and in NXT itself for so long. That’s so he can win that belt and feud with someone while oor Finn is cutting about RAW with his best pals too sweetin. Match will be braw, perhaps ever brawer than the first one. Joe will dae a few suplexes. It’ll be smashin

Prediction – FINN KICKS FUCK OUT EVERYONE!! Ok. Can’t even type that I think he’s gonnae drop the belt. It can’t be true. So he kills everyone and wins aw the belts and ownership of the company is passed to him cause he’s so good but he gives it away to charity cause he’s so charitable. LY Finn.

He’s Nakamura int he. I’ve saw him wrestle in the flesh three times and each time was something different. Even if the moves are the same, the story is always different. Every movement, every mannerism, every morsel of brilliance that pours out the man means SOMETHING and I don’t think anyone who’s unprepared for how good he is, is going to be able to handle it. I imagine it’ll be similar to the first time I seen Fergal Devitt (now oor Finn obviously) and didn’t know a lot about him before he fuckin tore ICW a new arsehole. But with all due respect to Finn, he’s not Nakamura and NXT Takeover Dallas is a bigger stage than ICW at The Garage in Glesga. Imagine unwittingly rocking up to that show buzzin for some Baron Corbin and this mad Japanese genius knees Sami Zayns beard clean aff. You’d pish yersell eh? Basically what I’m saying is be fully prepared to urinate all over your new slacks. Another thing that convinces me he’ll live up to expectations, is that he’s been given the perfect opponent. He might be a bit of a cheeseball sometimes and fuck knows why he wears a skip hat to the ring but he leaves it all out there every time. Even if you made him wrestle Mojo Rawley every week for the rest of his career he’d do his best to make it good, so putting him in there with the most exciting wrestler on planet earth is the right formula for the best of matches. An all-time classic. Not just NXT wise but life in general wise.

Prediction – Nakamura performs so well they re-jig the card for Mania and include an impromptu Japanese only MITB match. Nakamura gives an injured Hideo Itami a big cuddle before grabbing the briefcase and cashing it in during the main event. Nakamura ends the weekend as WWE World Heavyweight Champion and him and big Albert have a nice dinner discussing his success, and how nice having a nice dinner is wae yer pal.

Overall this show will be very good and very Nakamura. Its also on at 3am which is mad as fuck. Watch it. Also look how lovely this photo is. K. Thx. Bye 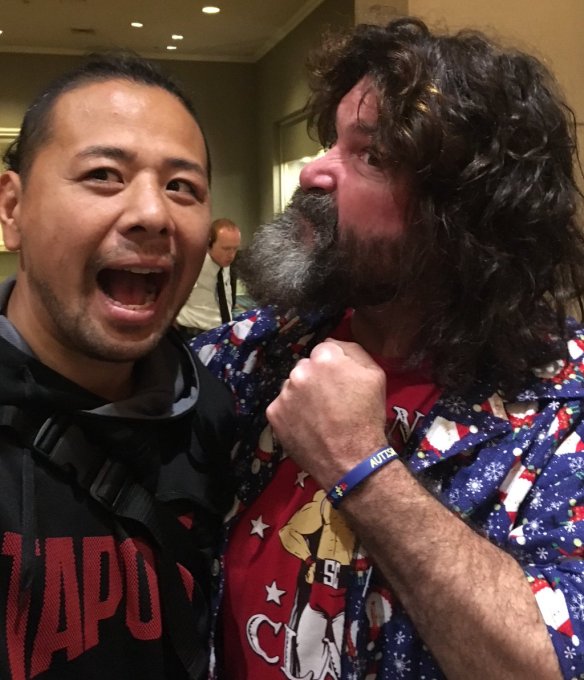