A wise man once said, if you can’t beat them, write list articles every day till yer fuckin eyes bleed. So here’s a list article about WWE Payback 2016 which took place last night in Chicago. I went to my pal Andy’s house to watch it, and we hung out for 3 or 4 hours before our other friend Keith arrived to make it a party. He made it a party because of his carefree attitude and commitment to bringing joy to those around him, and I can shower him in this praise safe in the knowledge he’ll never see it cause he never reads my shit. That chatter is irrelevant to the points I’m about to make about the PPV but important to paint as vivid a picture as possible regarding how the whole evening went down. Enjoy the words. Stay cool.

1. The Wyatt’s Weren’t On The Show Yet Were Heavily Featured On All The Promo Stuff. What’s that all about I ask you?

A lot of good things happening in WWE right now. The product feels fresh. Stagnant talent given a new lease of life. All that power of positivity shit. So this felt like a strange oversight. I know these things are decided well in advance and maybe there was big plans for the Wyatts before Harper went down injured, but how the fuck does it go from them all over the promo stuff to them not being on the show at all? If anything that’s false advertising. We were promised creepy beards. I expect my monthly dose of creepy beards to be delivered to me as promised. Although keep Braun and The Strowman Empire the fuck away from me. Somecunt should show that big diddy a Big Damo match and let him know that being huge isn’t an excuse for moving like your arse is made of 2p coins and fridge magnets.

2. If you didn’t want to get a step ladder, climb it and put an arm round Big Cass after Enzo’s injury, you’re dead inside. 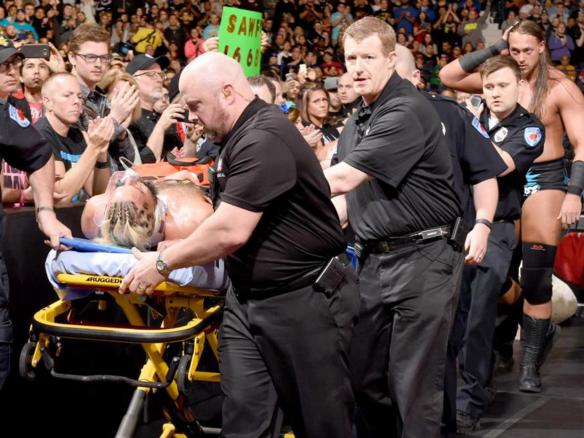 Unless you’re The Big Show, there’s nae conceivable way you can just chuck an arm round him without some kind of ladder being deployed because in case you hadn’t heard, yer man’s 7 FOOT TALL and that’s something that CANNOT BE TAUGHT (that’s how it goes eh? words to that effect anyway) but how utterly heartbreaking was it seeing the big man breaking his heart over his pal being ko’d? In that moment he couldn’t have given a flying fuck that their big chance to make an impression on a main roster PPV had gone because that’s his best pal lying unconscious and that matters so much more. Its a huge shame but they’ll have their match and when it does happen (to completion) it’ll be smashin. Cass will chuck Enzo at everycunt within a 5 mile radius of the arena and we’ll have the perfect end to this wee tale but that moment Simon Gotch chucked Enzo into the ropes and he landed on the floor with his eyes glazed over was some scary shit and the big man felt it. That’s brotherhood. That’s a pair of guys who’ll still be best pals long after this wrestling shit stops being a thing and it was a strangely heartwarming moment amidst a difficult time. Enzo was apparently conscious and doing well so no more tears big yin. Yer wee brerr wae aw the patter is going to be just fine.

3. Kevin Owens and Sami Zayn knocked it out the fuckin park

Bit of a contrast between their “I’m gonnae boot this Canadian cunt to death with my decidedly Canadian feet” best pal dynamic and the one Enzo and Cass have, but this match has the strange ability to feel fresh even if in reality its the 10003846023th time they’ve wrestled each other. Fuck knows why they didn’t go with a singles match between them at Mania instead of the admittedly hugely entertaining 6 man ladder based barney they both ended up involved in, but it lived up and for me was a better match than any of their NXT battles because this time Sami Zayn didn’t have to be leathered to within an inch of his life to the lose the match. He simply lost to the better man on the night. Big KO. Surely a matter of time before he’s in amongst the hunt for the big belt.

4. Ryback was back to his hilarious best and his match was tidy. 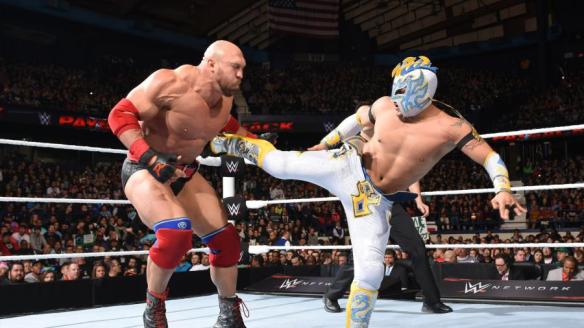 When the big guy lets loose and gets the humour flowing he’s one of the most entertaining guys on the roster. Recently his character has been generic personality-less meathead and its fuckin poisonous. No one gives a fuck because the character gives you ride all to invest in. Nothing to hate, love or feel anything about. Its just nothing. When he’s allowed to let that sense of humour go a wee bit (or when he’s not allowed and does it anyway) I love the big cunt. Shamelessly and forcefully. I love him more than he loves eating loaves of bread in one gulp. When he responded to the rapid CM Punk inspired Chicago boos he was on the rough end of by mimicking Punks entrance he displayed a glistening set of giant baws and waved them in all of our faces, and not to forget HIS WEIGHT BELT THE PRE-SHOW STOPPER ON IT! Fuck knows why I found that so exceedingly hilarious but I did and it was. The match was also really quite good and deserved to be on the main show but they seem to have given up the ghost when it comes to making Ryback a star now. Bad news for him, but good news for us if he keeps being given free reign to be as much of a hilarious dafty as possible.

5. Ambrose vs Jericho was 2 valium washed down with a shot of whisky masquerading as a wrestling match 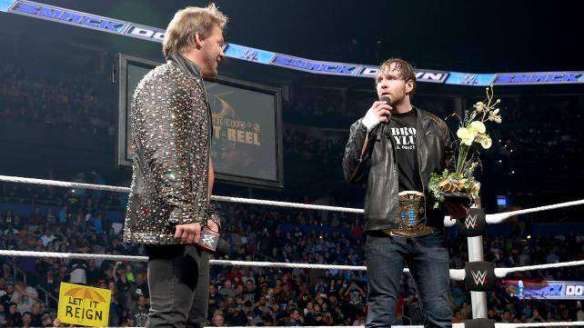 The match was pretty good, so why was it so boring? Who the fuck cares. I don’t even care enough to muster up any more words about it. It was that level of disengaging. Please stop doing these meaningless feuds with Jericho and expecting it to be good. It never is because beating him means fuck all these days. His role in wrestling is to kid on he’s a threat to new talent until they pin him, then he fucks off to wear jackets without shirts with his band instead of doing it at pro wrestling shows. He’s actually had some decent villainous moments since he turned on AJ and its been one of his more enjoyable recent runs, but something about this feud was majorly off putting. Maybe its Ambrose. Maybe a “lunatic” that complies with companies orders for him to wear his own merch isn’t all that credible as a lunatic. Guess I was lying when I said I couldn’t muster up any more words about it eh. These appear to be more words. So are these.

6. The finish of Natalya vs Charlotte was so fuckin cringeworthy and stupid I’ve not stopped shaking my head since it happened. My neck’s fuckin killin me mate. 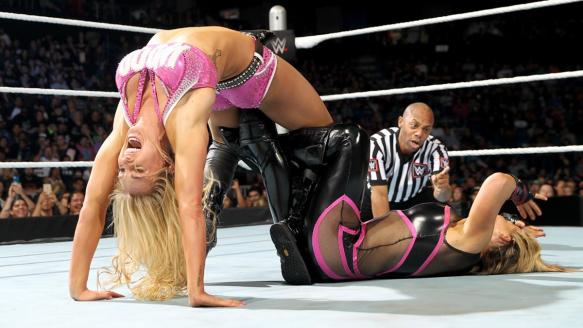 Why? Did they do this to annoy Bret because he does fuck all but moan about them in any press outlet that’ll give him the opportunity to do so? Fuck knows but doing the screwjob finish completely undermined another excellent match between two of the best wrestlers WWE have. I truly don’t understand the logic or if they’re even going to explain why lil Naitch has any motivation to be involved in it. Earl Hebner was under pressure. Feared losing his job maybe. That was a real life situation and the people involved and the decisions they made actually made a lot of sense because of that. In this weird re-hash of it, fuck all made sense, but hey, we got to see stereo sharpshooters from Bret and Nattie so every cloud and all that shite.

7. The Miz is kinda killing it right now. 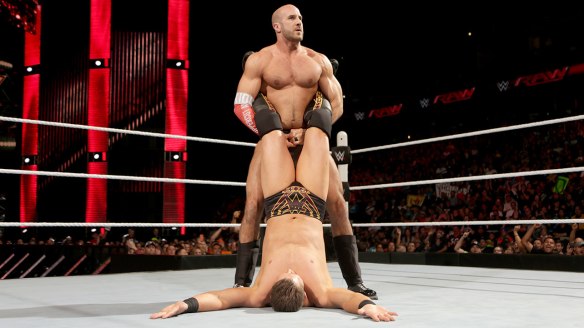 People seem to hate him for things that happened in the past more than anything he does these days. He wasn’t ready to be a main event calibre guy and probably never will be of that level but is it his fault he was put in that position? Should he have told them no when they asked him to feud with Cena? Of course not. He was actually a pretty decent heel then as well, it was more his lack of believability as champ that held him back more than him lacking as a character. He was also completely average as a wrestler, but he’s improved to the point that most of his matches are at least solid and character wise he’s got it locked down. Arrogant, delusions of grandeur, smokin hot wife that makes the casual fan go “how the fuck did he get her?” and plenty of guys that people love to batter fuck out him. Like Cesaro, who had Miz tapping before sleekitness led to the quick win and Miz retaining. He could easy have a 6 month+ run with the IC belt where he fucks over all the goodies and it would be interesting enough before the Zack attack reclaims the gold he was robbed of in the first place. WOO WOO WOO. Ye ken it.

Vince didn’t even make a decision. They’re both running RAW. Running RAW and making decisions on PPVs aswell. PPVs aren’t RAW. Who runs Smackdown amongst all this nonsense? Is there a third McMahon bairn quietly doing that and shaking his head at his daft warring siblings? Barry McMahon, the background wan. Kept off TV for decades because he’s got a birth defect that made a third ear grow on the middle of his forehead. Shane and Steph are running RAW together, even though Shane lost his match. Because reasons. Don’t ask questions, just listen to this 20 minute promo that tells us nothing new and button yer fuckin lip.

9. The main event felt huge…and ended up a bit messy

The match was excellent for the most part and I loved the phenomenal forearm table spot, but did it make sense having Roman lose the match twice before winning it? Even if its by countout then DQ, they’re still losses for a guy who’s supposed to be dominant and almost infallible. Seen folk raving about it and I kinda get why, the match was entertaining and made a mockery of fannies chanting “you can’t wrestle” at Roman because he held his own with one of the best on the planet, but I hate all that stop-start carry on. I hate that Gallows and Anderson got involved again and they’re keeping up this premise that somehow AJ manages to miss it every time they batter the guy he kinda needs them to batter. Its a wee bit convenient eh? Hopefully its leading to some Finn Balor based goodness but it seems a bit daft and leads to The Usos being involved in main events to even the odds which just isn’t what anyone needs to see. Sorry to the lads n that, they were once my guys and I still find them somewhat entertaining when they do wrestling things, but my god, how fucking boring are The Usos and when did that happen? Nae idea how you’d even change that either. Aside from a Jeremy Kyle type of bust up that reveals they aren’t actually brothers and they only look so alike cause Jimmy Uso is actually Marty Jannetty wearing a Jey Uso mask, there’s not many ways you could give them more of an edge. After all that excitement and AJ winning the match twice, it all ended a wee bit damply with a run of the mill spear for the win.

10. Overall it was pretty good