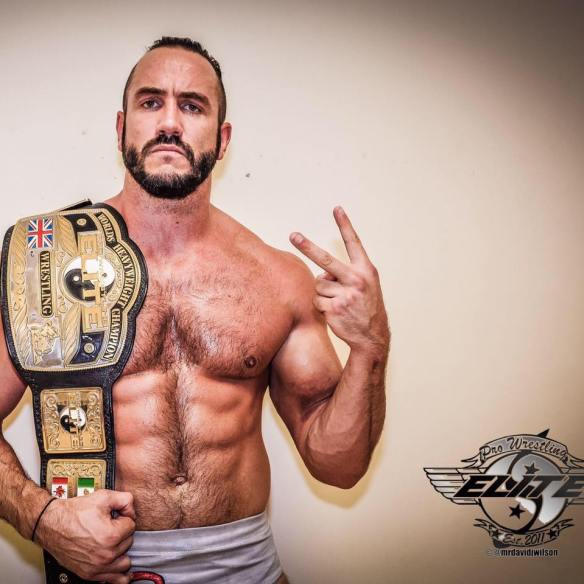 You lookin at ma belt mate?

Iestyn Rees and The Marauders have made a profound impact on the Scottish scene over the past year, establishing themselves as a force to be reckoned with in ICW quickly after forming as Bird and Boar took the ICW Tag Team Titles from Polo Promotions. With Bird and Boar firmly established in the tag division, Iestyn Rees has been staking his own claim for recognition in the mix for the ICW World Heavyweight Title. As the only man to hold the PWE Heavyweight Title more than once, his credentials are there. In PWE particularly he’s wrestled the best and became a better performer for it. He also happens to be carved outta granite. A big block of shiny Welsh granite who’s more than adept at chuckin dafties aboot. From wee dafties, to medium sized dafties, all the way up to big incredible hulk sized dafties.

You go by the “Alpha Male”, a bold claim by definition. Are you actually THE Alpha Male? and if you are, do you promise you wont steal my burd? Nah I jest, seriously though, how did that nickname come about and how does it tie in with your character?

No bird stealing I promise!! Yes it is a bold claim and if you look up Alpha Male in the Dictionary the quote is as follows: “the most dominant, powerful, or assertive man in a particular group” I think that when you look at the British Wrestling Scene and further afield when I step in locker-room of any company I am dominant, powerful and assertive hence why I am the Alpha Male.

Now there was a time when myself and Charlie Sterling were a tag team and we derived the name the Alpha Males because we literally covered all bases when it came to wrestling, high flying, power, technical etc. When that teams time came to a close it was a natural transition for the leader of the team yours truly to step up and take on the Alpha Male moniker.

In case the answer itself didn’t suffice, here’s a visual aid articulating the point courteousy of Warrior Fight Photography

On to more wrestling based stuff I guess. You have twice been a PWE Champion. The only man in the companies history to do so. You also were the chosen opponent for 2 of Drew Galloways matches with the company. His only matches in his hometown. How vital has the PWE’s trust in you as a performer been for you establishing yourself in places like ICW, PCW, Progress etc?

PWE for me has been the company that allowed the evolution and progression of Iestyn Rees to occur. I had, had success prior to my long list of knee injuries and surgeries in IPW being crowned their champion beating Martin Stone, if I’m truly honest this was probably a little too early in my career and the title run exposed some of weaknesses I had as a wrestler at the time. The injuries caused my bookings to dry up, I was lucky enough to then spend 2 years working mainly for Welsh Wrestling honing my craft and trying to improve every aspect of my wrestling ability.

Once I started to gain more bookings elsewhere etc, I discussed with Adrian (Lionheart) about bringing me into PWE (I had always wanted to work in Scotland as the scene has grown from strength to strength). Adrian was keen to use me, but he wanted to get the best from me. So I had vignettes hyping my debut and from then on I have been a main eventer for him ever since, working all of Scotland’s top talent Wolfgang, Damo, Grado, Noam, Joe Coffey and of course Drew. The top tier talent I got to work and Adrian’s faith in me allowed my profile to grow considerably, this allowed me to pick up work in PCW and ICW and to be used as an integral part in both companies.

How did you feel those matches with Galloway went? Was it a learning curve for you at all? Being in there with someone who at that time was one of the hottest properties in Independent Wrestling?

Those matches were and still are the 2 of the biggest 3 matches I’ve been involved in, Adrian put a hell of a lot of trust in me to go toe to toe with the hottest commodity in world wrestling in his hometown. I felt that I held up my end of the bargain and gave as good as I got from Drew, in terms of learning curve every match I try to improve on the previous one, but certainly Drew forced me to work at a level I hadn’t until that point. I feel that coming away from those matches I am now a much better performer because of them.

Your ICW career started with a few defeats. Took a while for you to chalk up your first win. Since The Marauders started up you personally have been on a hot streak as have your fellow Marauders. How vital has this alliance been in your own upturn of fortunes in ICW?

Coming into ICW I was put up against the top tier talent 4 World Champions and a Zero G champion and perhaps I took them all to lightly as I had faced them at other companies and come away with my fair share of victories. The marauders came together as Bird and Boar reminded me that Wales has been over looked in terms of British wrestling for far too long and as a small nation we were better to stick together as there is always strength in numbers.

My current hot streak just proves that if you have your head in the game, you possess the physical capabilities and the support of your boyos the wins will come and come. 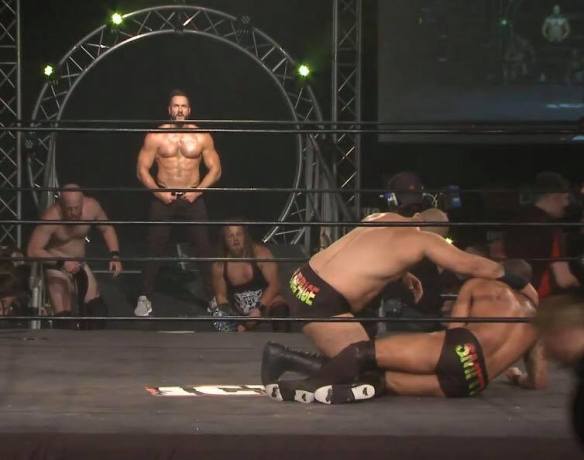 Whats the overall goal for The Marauders as a unit going forward? Aw the belts?

Of course I can’t see a team taking the tag belts from Bird and Boar, and all I need is an opportunity at some gold and I can see us holding all the belts.

British Wrestling has never been hotter than it is right now and high profile opportunities are popping up all over the place. Do you feel you’re one of the next in line for one of these opportunities perhaps with WWE, WOS etc?

The eyes of the wrestling world are certainly focused on Britain and its wrestlers as we have the hottest products in the world right now. Next inline might be a little presumptuous to say, but do I think I have the ability, charisma, the look and the marketability to offer either WWE, WWEUK, WOS, Impact or wherever someone who they could invest in. #InvestInIestyn

#InvestInIestyn because who doesn’t like their champions to glisten? If you’re not as shiny as the belt itself you’re not worthy to hold it

Is there anyone you haven’t faced yet that you fancy going up against? If you’ve not wrestled Mark Coffey someone should definitely make that happen

Oh wow, I feel that im only getting started and the list is as long as my arms (6’ 9” wing span, they are pretty bloody long.) But Mark Coffey is definitely top of that list the guy is phenomenal! Others include Lionheart, Jester, Whiplash, Zack Gibson, Pete (Dunne), Trent and Tyler hell anyone and everyone.

Do you enjoy proving people wrong/winning them over, or as a big baddie are you not particularly arsed what people think? I wasnt a huge fan before (sorry, dont kill me or that plz) but over the past year I’ve been won over so was just wondering if thats an aspect of wrestling you enjoy. Being able to shape the way fans see you with your performances?

I’m out there to do my job, in today’s Indy wrestling scene there aren’t many guys my size 6 foot 3, 17.5 stone. Now I wrestle a style that isn’t to everyone’s tastes and I’m used to hearing people not being impressed or not fussed by me as in the case with yourself I am confident in my ability and captivate people and win most not all round with my style. But don’t let that fool you I’ve got lots of tricks in my bag and I occasionally let them out and when I do most fans are shocked, I can fly (check out my “Undertaker” dive alongside Aaron Echo at the Hydro far example)

You’ve been compared to Chris Masters in the past due to your similar physiques and you’ve even wrestled him a few times. Is that a comparison you enjoy and is he someone you’re a fan of?

I feel the comparisons to Chris are flattering hell the guy has an incredible physique (I was a huge fan of him when he debuted in WWE) and has worked at a top level for the WWE, but at the same time I feel that although that maybe peoples first impression after they have seen me perform a few times then will understand that I’m not a Sh*t Chris Masters, I am Iestyn Rees, I’m the Alpha Male. I bring a whole different package to the table.

Because how many times has Chris Masters ever done a big dive at The Hydro with Aaron Echo? 0 times. Big man couldnae lace Iestyn’s boots.

You’ve been putting people “on notice” lately. Making short work of “local” talent in ICW, and even posing with the corpses…sorry, opponents, in a fishing style “catch of the day” pose, are you enjoying making an example of these guys, or is it time for the Alpha Male to go toe to toe with some more worthy adversaries?

The whole roster is “On Notice” that’s been evident when I’ve been on tour and beaten Aaron Echo and DCT in quick fashion. Ill wrestle whoever I’m matched up against “Local Talent” to World Champion, but people need to understand if I’m sent out there against Local talent or anyone else they run the risk of being the latest “Catch of the Day”!

Last but not least. Tell us anything you like. Plug your social medias. Tell us a joke if you fancy. Whatever you like.

Thanks for the interview; your reviews are definitely a great read.

Cheers to David J.Wilson and Warrior Fight Photography for the shiny shots that made the words pop