When WWE announced the UK Championship Tournament a lot of eyebrows were raised. Sceptics wondered if their motives were pure and if they would continue to invest time and money in the UK wrestling scene after the tournament, many suspecting they would instead plunder all the best talent, use them poorly, and return them as soulless husks of their former selves. A wolf without a gang, a Pete who’s truly dunne. Trent three and a half. Tyler wishing he hadn’t taken the bate. Many believed its only purpose was to kill off a potential rival in World Of Sport, and once they had successfully curtailed the success of that venture, they’d continue being blissfully unaware of just how much talent there is on this wee island. Instead choosing to invest their time in folk who who’ve never chucked a back elbow in anger once they’ve given up trying to make it doing something else. Any question of that being the case was undoubtedly punted to fuck when Triple H emerged at an ICW tour show for no particular reason other than to just be there. Opportunity dictated that it would be easy enough for him to do that due to WWE running in Cardiff on the very same day, but that being the case makes the fact that he did appear all the more fucking amazing. Not to mention exciting. He deliberately put eyes and ears on someone elses product the very same day they were running in the same city as WWE, imagine someone told you there was even a remote possibility of that back in the day where any comapany who came within pishin distance of WWE was swiftly vanquished. These are heady days indeed. 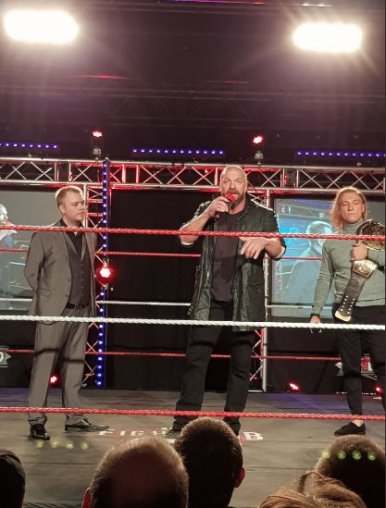 Ye see, in case its escaped you, Triple H is the heir to the throne. Vince McMahon will be the patriarch of WWE until his body and/or mind gives out (Vince McMahon dying is an actual real life thing that will happen believe it or not, although the manner in which he took an absolute scudding aff Kevin Owens would suggest that time will not be soon) but Triple H is laying the ground work with the view to becoming the main guy one day, and along with wife Stephanie Mcmahon, running the whole operation eventually. As Executive Vice President of talent and live events, he already handles a lot of the day to day running of it, and oversees the wildly successful NXT brand, which is essentially WWE’s old developmental system on steroids.

The recent influx of talent on NXT even before the UK Championship tournament suggests that important people have had their eyes on ICW, Progress and the like for a long time. Killian Dain was the ICW World Champion less than a year before making his Wrestlemania debut in the Andre The Giant Memorial battle royal, where he made it to the final three. Nikki Storm was once an ICW regular before becoming Nikki Cross, and has portrayed a strong character in NXT pretty much from the moment she walked in the door, being one of the founding members of Sanity, a stable led by Eric Young that Dain would also go on to join. While the UK wrestling scene cant claim Aleister Black as one of their own, there’s no doubt the impact Tommy End made in the UK with places like ICW and Progress were a big part of the reason he was drafted in too. In fact, as John Lister recently tweeted, of the matches announced for the latest NXT takeover special, each and every one has an ICW alumni involved. Arguably the most notable ICW alumni of all, Drew Mcintyre is the latest to be given the “ball”, and when you consider the fact that Finn Balor, Shinsuke Nakamura, Kevin Owens, Bobby Roode and Neville as among the illustrious list of former NXT Champions, it brings that achievement into perspective and lets you know what WWE have planned for Drew’s second stint with them going forward. With the greatest of respects to his former 3MB cohort Jinder Mahal, if they’re open to giving him a stint as WWE Champion, they’re open to a Scottish born big ride of a guy finally living up to that “Chosen One” billing and leading the main roster going forward but for now he is a convincing and commanding champion on NXT, truly a beacon of hope for those who are let go by WWE and think its the end of the road. Its not. As Triple H put it, places like ICW who believe and invest in the development of talent are the “grass-roots” of the wrestling business, and there’s nae shame in having to go back to where it all started to get where you’re trying to go. 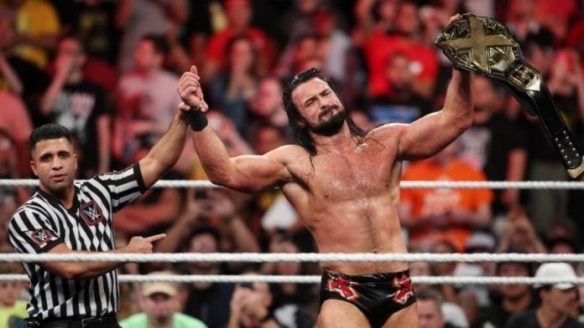 The simple reality of it is this, WWE could probably invade any company they want, rob all their talent, and leave them without a pot to pish in. The fact that they’ve recognised a vibrant independent scene is good for wrestling and they are working with companies to ensure their continued success instead of burying them is a good thing. A great thing. The trust stretches so far that they’ll even give these companies a wee shot of active in ring talent as well as high profile non wrestling appearances from the likes of Finn Balor and Triple fucking H. ICW once prided itself on being a product for those sickened with what WWE had become but since those intentions were stated WWE has morphed into something else entirely and a mutually beneficial working relationship is the best way to keep ICW growing. To a point where you couldn’t see Fear and Loathing being anywhere other than The Hydro or fuck it. Even somewhere bigger. Lets Wrestlemania 2 that bitch and have one show at Hampden, one at Ibrox and another at Celtic Park. Just the 160,000 wrestling fans you’ll need for that. Nae big deal since the last Wrestlemania attendance was in the millions to see what is now a 5 day long show.

The madness goes far beyond the companies you and I hold dear on these shores, as Chris Jericho recently became embroiled in what seemed like a genuine war of words with NJPW’s Kenny Omega. As Omega is a man widely regarded as one of, if not THE very best in the world, working for WWE’s biggest global rival with seemingly no real interest in ever working there, it seemed that Jericho’s words were a genuine scolding from a dyed in the wool WWE company man. Yet here we are living in a reality where Jericho vs Omega is a real thing that will happen at 2018’s Wrestle Kingdom event. Unless some kind of internal turmoil has gone undocumented, Jericho is not on anything like bad terms with WWE and this seems more like him being on assignment than him being poached by NJPW. While I don’t think any big jointly promoted WWE/NJPW event is on the cards anytime soon, they definitely don’t despise each other and it would seem WWE are at least open to working with everyone in some capacity. 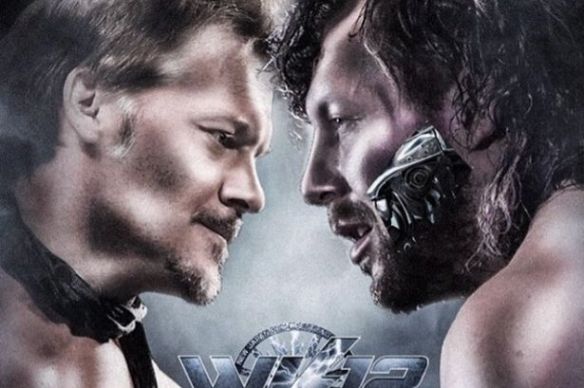 A lot of folk will tell you that’s a bad thing. A lot of folk will forever think its all part of one big ruse to make WWE the one true wrestling company, and the only alternative that gets to exist is that borderline illegal chainsaw shit ye sometime see pop up on facebook with the tagline “I Miss When Wrasslin Wuz Exxxxxtreeeeme!” but truth be told, WWE is the mountain top. If WWE is Barcelona, and ICW is whitever team you support, as much as you might dislike Barcelona and find their success boring as fuck you recognise them as the biggest most successful thing in the industry. Ultimately want to see the guys from your team make it to that level one day. Them making it to that level not only suggests your team is something right, it suggests that talent your team has nurtured and helped get to that level aren’t “developmental”. They aren’t for the future. Think about it, of all the UK Wrestling alumni WWE have used, how many have spent significant time in developmental? I’m no talking NXT shows, I’m talking the cunts who train for years before they even get a ring name and get to work on live events. How many? None. Viper was a prominent part of the recent Mae Young Classic as well, making the quarter finals before losing out to another UK regular Toni Storm. Kay Lee Ray and Ayesha Raymond also represented the UK scene as part of that field. Noam Dar is on RAW every week pretty much. While Drew Mcintyre, Killain Dain, Nikki Cross, Jack Gallagher, Aleister Black and co all thrive on weekly WWE programming. Wolfgang, one of the most uniquely talented big men in the world for over a decade now gets to fly all over the world, literally and figuratively, working in front of huge crowds with WWE titles on the line. If that’s not the dream, you and I see this wrestling caper very differently and as much as I’d want to see guys like Wolfgang, Pete Dunne, Sha Samuels, Noam Dar, Drew Mctintyre, BT Gunn, Grado, Kay Lee Ray, Viper, Joe Coffey, Mark Coffey, Stevie Boy, Jackie Polo, Kenny Williams and co play for my team forever, some of them will make it to bright lights and big bucks of Barcelona.

If their success comes as part of WWE actively working with other companies, and that leads to mad moments like Triple H popping in to say hello at ICW, then sign me up for the madness. Sign me up for not having a fucking clue what happens next. Wrestling is supposed to keep you guessing and we seem to exist on the timeline where even the most outlandish guess isn’t completely inconceivable so instead of constantly wondering what WWE’s motives are, why not just enjoy the endless stream of great wrestling this whole thing is bringing to us? There’s never been a more blessed time to be a fan of this. Strap yersell in and enjoy the ride.