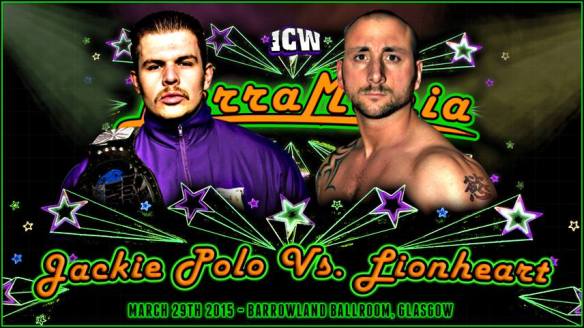 Wrestling is all about trickery. Making the audience buy in to something that might not be 100% real. There are feuds and rivalries between people who are the best of pals away from the ring, and the trickery there is convincing you that they aren’t best pals; that all the jabs chucked, and running knees to the baws delivered were all real. Fuelled by true friction. The majority of wrestling feuds are between two people who can at least tolerate each other. There’s always an element where the characters have to inject a certain amount of emotion into it to make it believable. Also known as “acting”

Jackie Polo and Lionheart are not acting.

When this rivalry first emerged it made all the sense in the world. They do have completely different wrestling philosophies. Lionheart has always been an avid self promoter and there’s fuck all wrong with that. If you have a name that people recognise, and accolades people might take notice of, tell everycunt. Shout it fae the fuckin rooftops, cause shouting it leads to opportunities, and opportunities leads to money. Its as simple as that. Everyones looking for the best way to get people through the door to see them do that wrestling carry on.

Jackie Polo self promotes in a different way. Jackie Polo lets the world know that in his eyes, he’s the best Scotland has to offer. In that ring, on the mic, and in any sort of competitive scoop slamming competition. He’s the guy. Come see him if you want to see perfection. Simple as that. Two different ways of doing things. Two different attitudes towards everything. They clash. No matter who you believe when it comes to the origins of this unrest, its very clear by the way the “shoot” interview in January ended, that this is real. These two fucking hate each other and there’s a good chance this match ends in a no contest because they beat each other to a bloody pulp. ICW has had plenty of extreme moments, but they’ve had nothing as extreme as two guys vehemently battering fuck out each other. The difference between this feud and pretty much every other feud in Scotland recently, is that these two truly hate each other and cant wait to show 1,600 in the Barrowlands just how real it is.

Theres an aspect of this match, and the main event at Barramania that some folk might be overlooking. This is the old guard vs the new school. This is auld Crossroads vs the revamped Crossroads. This is the auld dugs vs the slightly younger dugs. This could mark the dawning of a new era. Ye see Jackie Polo wanted Lionheart in the first place so he could prove that he was better than him. That he had surpassed any level Lionheart had ever reached. He thought Hearto was on his way out, and he should have stuck to the first retirement. Whilst that infamous tweet was undoubtedly disrespectful, it was a sign that Jackie Polo never felt Lionhearts injury was relevant in a wrestling sense because in his eyes, he had already retired, and Jackie Polo was charged with delivering one last nail in the coffin.

But Lionheart never gave up. He worked his way back. No matter what you think of Lionheart, you cant do anything but admire that. Not only a career threatening injury, but a life threatening injury. He bided his time, and rebuilt. Now he can do the thing he loves to do again, and in his eyes that means Jackie Polo dies. Thats where the venom comes from. Its fuck all to do with any of the personal stuff both Jackie Polo and Lionheart himself have brought up. Its fuck all to do with any shots they’ve taken at each others careers. Its to do with two guys not liking each other. To the point that one of them didnt even have a sympathetic word when the other almost had his retirement taken out of his own hands. Jackie Polo doesn’t respect Lionheart, and Lionheart couldnae give a shit about that, but the fact that Jackie Polo almost found humour in the fact that Lionheart might not be able to do the thing he loves anymore? Thats when professional courtesy goes out the window, and the punches dont get pulled. The elbows get properly dropped. Right on the pointy bit. The rocks are properly bottomed. The hazards are real. 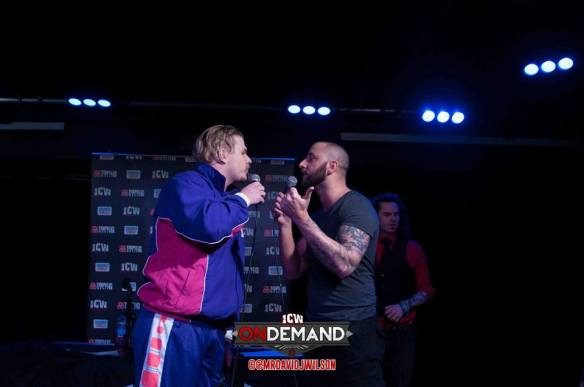 The problem for Lionheart there is that Jackie Polo disnae gie a fuck. Jackie Polo has had the guts kicked out him by Johnny Moss and still got the win. Jackie Polo has sat in front of an audience that chose to turn the other way, and remained undeterred, delivering a performance every time. Jackie Polo wanted this to be real, so he could show the world that Jackie Polo is not a character. Jackie Polo is not an exaggeration of a real man. Jackie Polo is real. There’s a Mr and Mrs Polo, and they still sing that song to me, about the time they called him Jackie. He didn’t want a match with Lionheart because he felt it could further his career as Jackie Polo the wrestling character, he wanted the match because as a man, Jackie Polo disagrees with the way Lionheart goes about his business. He feels that he’s an arse kisser, and if Jackie Polo can take enough jabs at the old dog to have him biting back, that’s exactly what he wants. Hearto SHOULD want to legitimately knock fuck out of him, and Jackie Polo is undoubtedly ready to fire legit blows back at him. Say what you want about Jackie Polo, but its exactly a year since this match was supposed to take place, and he’s kept this feud hot. Considering how fast things move on in indy wrestling, that no mean feat.

While the hatred between the two is undoubtedly real, there’s no doubt that they both know this could be the best match of their careers. Jackie Polo told the audience it would be rubbish. It very well might, but matches of this nature rarely disappoint. Polar opposites they might be, but they’re both performers at the end of the day and both want to showcase themselves in the best way possible. The best way to do that is to steal the fuckin show, and batter each other afterwards if ye must. The outcome of this match may give some indication as to what way the title match might go, because make no mistake about it; the majority of folk reckon Lionheart has it won. The crowd expects and they’re expected to get their moment. Obviously a no contest is possible but unlikely, so if ICW really want to show people they are putting their faith in the new school, having Polo come out on top would make a huge statement, and maybe give Joe Coffeys legions of fans a bit of hope when he faces up to on of Lionhearts old pals, the original Scottish superstar Drew Galloway. 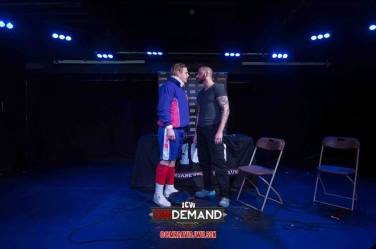 For me a Polo win would be a brave but logical move, because Polo was the one who made Scottish Wrestling real to me. That character made it feel like it mattered. If a guy could inject so much commitment into a character, and keep it going amidst unspeakable amounts of abuse, and the occasional threat of retaliatory urination from Sweeney, it must matter. These guys must be serious. On the other side of the coin, when I went to my first ICW show, the only person I was told about was Lionheart. He was “the guy whos wrestled for WWE and TNA” and he had a belter of a match with Mikey Whiplash that night, Truth be told, I’ve scarcely seen him have a shite match, and he undoubtedly earned all those accolades you hear rhymed off when his name’s mentioned, but to gain those accolades he needed opportunities to shine. He probably needed someone older and more experienced to step to one side and let him climb up the ladder.Theres certainly a thirst from a lot of folk to see Lionheart punch Polo’s cunt in, but maybe there’s a way to do that and still have Polo with his hand raised in victory. Maybe the valiant comeback can be equally valiant in defeat as it would be in victory.

Lionheart certainly has plenty left in the tank and will have a new lease of life since his recovery, but when you put the personal shit aside, it might make sense for Polo to win. The shock value alone would make it worthwhile, because wrestling is about trickery. Wrestling is about convincing the audience that what they’re watching is 100% real, and there’s nothing more real than something that leaves you slack jawed, wondering what the fuck just happened.

Having said that, Lionheart’s probably gonnae win eh? Ach who fuckin knows. It’ll be good but.

That last image, and all the other ones were of course provided by David J Wilson and his excellence. The shoot interview they are taken from can be found on ICW On Demand.