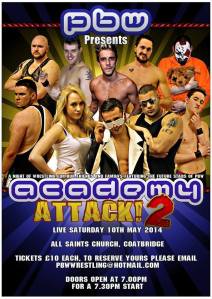 Coatbridge bore witness to the dawn of a new era on Saturday night, and it didnae even know it. Whilst locals tuned intae Ant and Decs Saturday Shite Takeaway, or whatever other pish was on, some may have even been shuffling intae one of the local pubs for a spot of karaoke, but if ye weren’t in that wee chapel that I cannae mind the name of, yer Saturday might as well not have happened. Ye might as well had a game of chappy, except the only door ye chap if yer own cause yer too much of a fearty tae play the game right. Aye thats right, in this metaphor I’m trying to claim you played the game wrong by no coming to the wrestling. Did ye catch that? It wisnae really an option for you to attend though, as it sold out weeks in advance. I queued up months before it wis even announced to get my ticket, cause I just had the sense something huge was the horizon. Slept in a tent wae a big stain fae some cunt pishin on it at T in the Park anaw. Brutal. Well worth it though. Pish patter aside, it was hugely encouraging to see the amount of raw talent coming through the ranks at PBW. Plenty of debuts were had, with a few still in their first few matches tae, but no one could be disappointed with their efforts. There wis matches and aw that tae, so I might aswell say some words about them eh? Bored ye wae this patter long enough.