When Joe Hendry beat Lionheart at Shugs House Party 4, something happened. Something that no amount of steering the story in a certain direction could stop. After years of derision aimed in Lionheart’s direction and a solid year+ of him being straight up called a fanny time and time again by hundreds and at times thousands of people, the people loved him again. Maybe not all of them, but a large enough percentage to see one of the most interesting things wrestling has to offer happen in front of our very eyes. The auld double turn. Baddie becomes goodie, goodie becomes baddie. Hero becomes villain, villain becomes hero. The whole landscape changed for Lionheart that night and it led to an opportunity he had more than earned. The big bout at The Hydro with the whole fuckin show. Rob Van Dam.

The difficult thing about it is that Rob Van Dam very much fits in with what ICW are and what the fans want it to be, so they are instantly geared up to cheer for him. That’s why you get the likes of him involved in a show like this, because a lot of fence sitters end up pulling the trigger on getting tickets because of folk like RvD. People who haven’t bothered their arse with wrestling for years see him on a poster and think it might be for them again. If folk are geared up to cheer for him and you put him in there with a guy who people are only starting to enjoy cheering for again after a long hiatus from doing so, the whole equation lacks a vital thing. A thing it needs to really feel like something more than two guys who love a frog splash and a sexy big dropkick. It needed to be a bit nastier. It needed the best villain in the United Kingdom today. Step furrit, Zack Gibson. 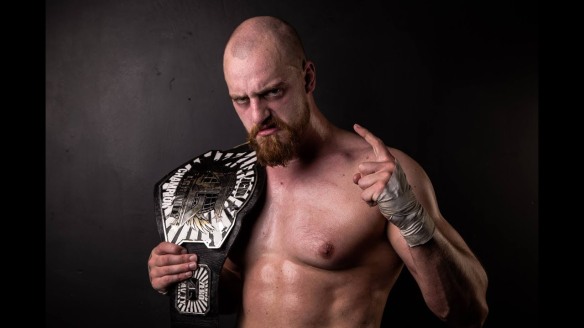 Over the past year and a half, Zack Gibson has gone from an occasional visitor who would impress without making a lasting impression, to one of the most engaging talents in ICW. A huge part of him carving out that reputation was something so simple it seems almost effortless when he does it. That promo. If you’ve not heard it before I’m sure you will SOOOOOOON (sorry). You see, Zack Gibson is Liverpool’s Number One. That’s already recognised, but SOOOOOON we will recognise he’s ICWs number one and shortly after that the whole fuckin world will recognise how good he is. There’s only so long you can ignore such a convincing self proclamation before you begin to realise its not just a promo. Its not hyping up something that isn’t there. Zack Gibson is one of the very best and absolutely stands alone as the best villain in the UK right now. He has an uncanny ability to spark the most apathetic crowd to become united in their hatred of HIM. That bad bastard who verbally dismantles your heroes before he sets about snapping their arm off and slapping them with their own hand.

While Lionheart’s feud with Joe Hendry showed him in his very best light and earned him this opportunity, there’s no doubt Gibson’s feud with Kenny Williams over the Zero-G Title was a big part of him having such a big match on the big show. Without that, he might have had to settle for another spot in a big multi man stramash but with the greatest of respects to that type of match and the competitors in the ladder match this year, he has earned something better. The strength of his work this year has made him part of the brickwork at ICW and while he was unable to wrestle due to injury, his scathing words towards Lionheart on ICW’s recent tour shows have made this match feel massive. Lionheart has had to listen to the same pish that he’s had aimed at him for donkeys but no matter how similar the content of Gibson’s barbs are to that of many others who have tried to tear Hearto down before, he delivers it in a way that you could fully see the recipient of his verbal doing losing the fuckin plot and going apeshit. In Lionheart’s case, his version of going apershit was taking an already hugely dangerous opponent in Rob Van Dam and saying to himself “know what we need instead of this mad bastard? this mad bastard AND a vicious Scouser who’s gonnae try and break my arm” 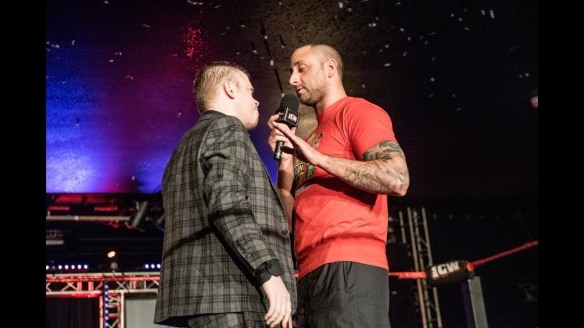 That’s the mad bit about this. Lionheart DEMANDED Gibson be added to this match. Gibson after all insisted him not wrestling on tour was HIS choice because he was raging that “LionMark” (ready made dope tag name if we ever get that Hearto n Mark Coffey tag team no one knew they needed till right now) already had that match at The Hydro while he had fuck all. That palpable rage supposedly led to him pretty much going on strike until he got what he wanted and Lionheart took the bait as all good heroes are supposed to. That’s what makes this match loaded with intrigue because this was supposed to be Lionheart’s big moment of redemption. The moment he wanted his comeback from that horrendous neck injury to be. The crowd go wild for him, he beats the big ECW legend, and the adulation from all corners comes pouring in the weeks and months that follow. Another bastard of a baddie has come along to fuck with that and that disrespect should not and will not be treated lightly. Lionheart isn’t going in to this for a fun wee jump about with RvD any more, he’s going in for the biggest test of his wrestling career, looking to unleash retribution that leaves Gibson SOOOON to be recognised by his dental records alone.

While Gibson and Lionheart’s feud has taken centre stage in the build up to this, Rob Van Dam has an opportunity to cement himself as one of those “imports” who never really felt like one. Like Paul London and Brian Kendrick who came in and instantly felt like they belonged, RvD ‘s appearance may well be the start of many marquee matches involved The Whole F’in Show. For me, having two top talents in there with him gives him more of an opportunity to impress. Years of jumping into and off of things that a human being really shouldn’t be jumping in to and off of has likely taken its toll on his body, not to mention years of partaking in the consumption of a certain herb that makes ye really like eatin cheeseburgers taking a toll on his cardio. Having two others in there who are locked in a deeply personal feud meaning all eyes aren’t always on him gives him the chance to get in amongst it and show The Hydro the very best of RVD when he chooses to. Some well timed dives on to Gibson and Lionheart while they heider each other to the brink of death. Remember this isn’t just a guy who was one of yer ECW cult heroes, this is a guy who had an arena so united in their support of him that they were ready to fuckin murder John Cena if he dared beat their man. This is a superstar we’re dealing with here and ye know whit, its a guy I’ve just got a major soft spot for so it is. He’s that rare type of wrestler who doesn’t just entertain, he sparks the imagination of his audience as well. He makes anything seem possible.

If you aren’t planning on coming to The Hydro, and the image of Rob Van Dam attempting to break up a fight between a Scotsman and an Englishman by utilising aw sorts of mad fly kicks doesn’t change your thinking then I dunno mate. Maybe this wrestling carry on isnae for you.