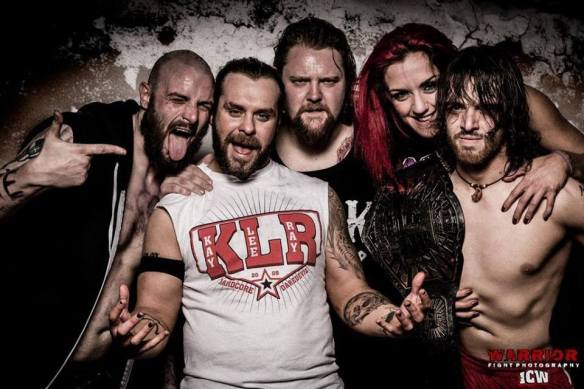 It was a night of homecomings as ICW END_OF_DOCUMENT_TOKEN_TO_BE_REPLACED 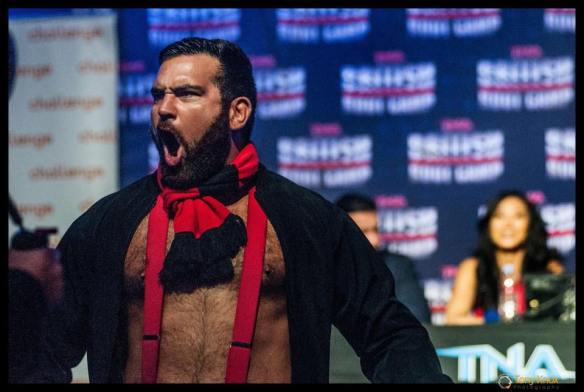 Sha Samuels gives me the fear. In wrestling, people who genuinely give you the fear are in short supply these days. Everyone has a vague idea of what their favourite wrestlers are like in person due to over exposure in social media and all that, but Sha Samuels is one of the few out there right now who still carries that mystique. That wee seed of worry that maybe he is exactly the character he betrays. A big loudmouth Cockey cunt (and he is genuinely a butcher) who loves nothing more than to come north of the border and slap some jock muggy cunts about. I think he might be a sound guy in person though. Maybe. Well he said yes to doing an interview, so that’s good right? Maybe I should have suggested we met in a pub to talk shit about northerners. Those cunts and their superior teabags. Fuck them. That would have ensured it went well, but aye. This is an interview with the man who’s single handedly terrorised the nightmares of wrestling fans throughout the UK. The Eastend Butcher. Sha Samuels.

Cards on the table big man. You shouted at me on one of the ICW Edinburgh shows last year and I’ve been having nightmares involving an animated butcher knife chasing me through the set of Eastenders since. So I’d like to take this opportunity to tell you that 1. It was my pal who was mocking your accent and 2. You might be the scariest cunt on planet earth who isn’t currently serving prison time for being a serial murderer, Now that’s out the way, I suppose I should actually ask a question eh. How are you today big man?

Next time I see you I’m going to scream at you louder and longer. Apart from you reminding me that some jock cunt shouted at me in Edinburgh., I’m ok.

Haha ICW are in Edinburgh on Sunday. I’m not terrified at all…nope…not even a wee bit…moving swiftly on….

Right. Proper stuff now. Wrestling. You were a part of TNA British Bootcamp 2. Making it to the later stages before just missing out on a place in the top 6. Tell us a wee bit about the experience and how you feel it went?

I felt really proud to have been a part of Bootcamp because I genuinely felt that the put the best people through to the last 16. So to be considered one of the best was great, being part of the live show at York Hall was a great experience.

You were very much in character throughout the whole show. Were you asked to stick to that or did you decide it would be the best way to approach it?

Don’t want to sound like a cliche, what you see is what you get! no one told me to act like anything. It’s 100% fact that I’m a loud mouth ignorant Londoner. Anyone that knows me will tell you the same.

Your impact on ICW has been felt since your debut, and you’ve recently formed a new stable with James R.Kennedy, Martin Kirby, Timm Wylie and Kid Fite called “The 55”. What does the future hold for Sha Samuels and “The 55” ?

I am buzzing mate. This year in ICW will be massive. I’m enjoying everyone second of it. “The 55” is going to piss off a lot of people this year. We’re a group of blokes who love a fight. We ain’t gonna go out there and try to make you love us or try to be cool…We’re a bunch of ‘orrible’ cunts!
I thought I had a great 2014 with ICW so I hope that continues into 2015.

The physical embodiment of pure evil. Look them aw. And their fuckin……faces (heels) 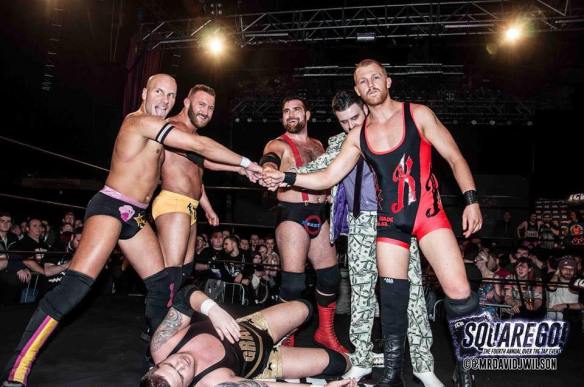 Are you ever going to get sick of battering Grado? I love Grado, but the particular way you batter him looks like the most fun anyones ever had.

I will never ever get sick of slapping him and beating him up!!! it’s a blessing.

Seriously though, you’ve worked with Grado extensively in ICW and in TNA British Bootcamp. With you being very much the classic villain, and him the classic babyface, How enjoyable is it to work with him in matches that are a bit of a throwback? The first London match in ICW in particular told a brilliant story.

Since working him at ICW I’ve wrestled him so many times, I’ve even wrestled him Germany. I wish I could face him at every show I’m on. It’s a story that people connect with straight away. When we worked in Germany straight away there was no confusion people were on he’s side, he ended being the most popular guy on the show. People relate to him. Honestly I was so happy to work with him at the Bootcamp finals and the Barrowlands.

What’s the long term goal for you in wrestling?

To keep having fun.

Have you ever worked as a face? I’m more asking our of my own curiosity than anything else, as I just couldn’t picture it haha. You coming out and high fiving excited children would be like something out of The Twilight Zone.

Yes it was on a holiday camp in some backwards town and I was called…”Everyman”Samuels.
It was good but hopefully never again as I don’t like speaking to punters.

Here’s a wee snap from IPW of Sha Samuels reprising the “Everyman” character to ask Grado if he wants to chew tobacco with him roon the back of the social club. 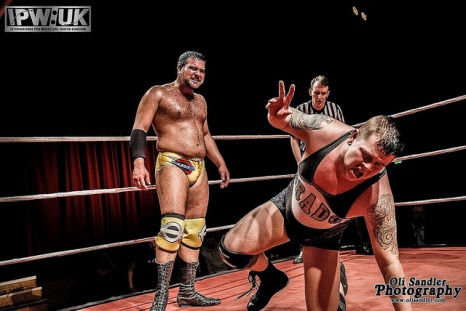 What made you pursue wrestling in the first place?

I was just a big fan who happened to find a wrestling school near me. I’ve just stuck with it. So glad I have because it’s the most fun.

Last but not least, anything you want to tell us about here. Feel free. If Sha Samuels has a discount code for Netflix, let us know. If Sha Samuels has some sort of threatening promo to cut on someone, feel free to do it here. The floor is yours big man.

Cheers to Sha for taking the time, and for answering the questions in such a entertaining and vaguely terrifying manner. If you want to see Sha probably battering Grado and various other Scottish folk, get yourself to some dates on the ICW tour. If you want to like Sha on the Facebook, do that here

Credit to David J Wilson for the wonderful photos. Also Oli Sandler, Tony Knox and anyone else.

END_OF_DOCUMENT_TOKEN_TO_BE_REPLACED

Life used to be a mystery. Every now and again, people did have tae stand alone. But when Simon Cassidy uttered the words “and you’re NEWWWWWW Pro Wrestling ELite Heavyweight Champion….GRAAAAAADO” It felt like………….

END_OF_DOCUMENT_TOKEN_TO_BE_REPLACED

Thank fuck for the abject fickleness of modern technology eh. Cause without the hard camera at PROGRESS – Chapter 13 failing, we wouldn’t have been given the gift of seeing the show for fuck all. It says a lot about the dedication to the fanbase that the owners have that they deemed this unfit to charge any money for, cause let me let ye in on a wee secret troops. They absolutely could have charged money for this. Hard camera or not, this is easily one of the most complete wrestling shows I’ve seen all year. To the point that if I had run it, and all I had from it was a few blurry polaroids and a tape recording of Rampage Brown screaming “WRESTLING!” into a tin can, I’d charge a fee for folk just to have the privilege of being exposed to that. If you like indie promotions with a commitment to storytelling and building its own stars as opposed to relying on imports to shift tickets…PROGRESS has all of those things.

END_OF_DOCUMENT_TOKEN_TO_BE_REPLACED

So Ayr’s a lovely toon eh? I know it’s a tad unusual tae start a wrestling review praising the toon the show was held in, but I hadn’t been tae Ayr since I wis a wee yin, and let me tell ye, it’s a delight. The kind of place ye could see yersell strolling through the main street, arm in arm wae yer one true love, hauf bottle of yer finest Blue MD in yer back pocket, headin tae the Toon Hall for a wee bit of the wrasslin. Unfortunately I had nae true love, or MD with me on this expedition, but I did have my driver and I did have a wrestling show at the Toon Hall tae attend. A wrestling show which contained a mixture of the best in UK Talent, and the physical anomaly known as Uhaa Nation. Uhaa fuckin’ Nation. A marvel of a man. I swear, this cunt is a bawhair aff 300 pounds, and we saw him dae a double standing moonsault in what felt like one motion. I dunno if I’ll ever get over that tbh, but before that we had some other guys daein some very entertaining things indeed. Wantae hear about them? Who am I askin. Ye widnae have clicked the link if ye didnae, so mon in n I’ll tell ye eh.